For the Love of Drones 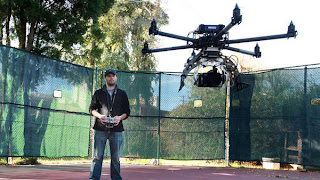 As time has passed, drones have eclipsed their use for solely military means, and their usage in the civilian world become more widespread. They have the capability to fulfill several purposes for a variety of actors; by environmental activists to hunt down whaling boats, by police forces for monitoring and surveillance, by farmers to spread pesticides over crops, by hobbyists for enjoyment… the list goes on and on.

Free reign obviously does not exist for civilian usage of the technologies. The American Federal Aviation Administration (FAA) allows the usage for drones for recreational purposes, but bans the use for commercial purposes (like real estate agents desiring to take aerial photos.) The loosening of restrictions, however, is well underway. The European Commission has conducted a series of meetings to create a regulatory framework in which civilians can increasingly use drones, and the American Senate passed a bill that requires the FAA to create new rules allowing open skies for drone flights starting in 2015.

This obviously poses many problems: what to do in the case of UAVs losing communication with its operators, how UAVs would detect other aircraft, and the available technology enabling their use for increasingly destructive intent. Efforts have been made to remedy these glitches, like the FAA issuing temporary permits to examine how drones operate in airspace used by commercial and private air traffic, efforts to develop lightweight probes to “sense and avoid,” . However, these technologies might be too extravagant for the size of the devices desired to use by most civilians. Most devices, like those used by several police forces, would inflict the damage of a bird strike if it was to come in contact with an aircraft, thus a requirement for elaborate technologies to accompany their use seems ill advised.

The expansion of drones outside of military use also opens up several privacy issues. Since it is not constitutionally prohibited for civilians to use surveillance drones, consequently there are no regulations on whom and for what purposes their surveillance capabilities are utilized. Additionally, the expansion of drone knowledge will inevitably land on the steps (or computer screen) of the “bad guys,” and thus could potentially pose an increased threat to societies. However, where there is a will, there is a way- and if a criminal/terrorist/etc seeks to learn about and use drone technology, they undoubtedly use illegal ways to obtain this technology, thus this worry could be rendered obsolete.

While drones would serve a legitimate purpose in law enforcement, construction, security, agriculture and countless other fields, they pose several security challenges as well. However, since societies typically have failed at stopping the dissemination of technological information, hopefully the benefits drones offer civilians can be utilized without inflicting major dangers upon society.