This is why we can't have Nice Things 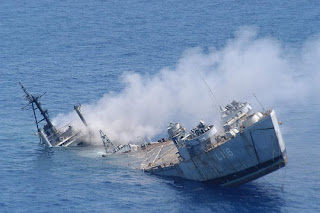 The US Navy, in an impressive display of multi-tasking, not only established a new fleet last week, but also managed to give itself two huge black eyes. It seems that rum runners and Hugo Chavez aren’t enough of a challenge for our Navy, which opts to spend its extra energy ‘whistle blowing’ and ‘making sure its officers do their jobs.’

April 20th saw not one, but two reports by the Navy’s Board of Inspection and Survey (InSurv) detailing woefully, if not pathetically, maintained surface combatant ships. Named in these reports were the Chosin, an Aegis class cruiser, and the Stout, an Arleigh-Burke class destroyer.

Despite the inherent differences in the ships, their shortcomings were surprisingly similar. In both cases, the ships’ flight decks were rendered unusable by a variety of problems, the ships’ combat systems had numerous issues, including guns, close-in weapons and missile cells which COULD NOT FIRE. There were also problems with rudders, communications equipment, anchors, engines, radar, and life-saving equipment, the likes of which should have shamed the captain of a ship-wrecked shrimp boat, let alone an active warship.

Just to be clear, the barrels on some of the 5-inch guns had CRACKS in them and the fuel leaks in the missile cells meant missile launch would likely result in an EXPLOSION. But given all the other problems, the only hope these ships had of any offensive capabilities would involve igniting them and ramming enemy vessels (if they could muster the steering ability and engine power). So maybe the fuel leaks are a good thing.

So now the bad news…these ships were from different fleets in different oceans, suggesting what one retired admiral has dubbed, “an endemic problem in the force.” To be fair, both ships had just returned from deployments, and are scheduled for upgrades and maintenance. However, they are still supposed to be combat-ready and -capable. Clearly they are not, and the commanders of each vessel should be held accountable.
Posted by Ale81 at 1:02 AM