Not so Quiet on the Eastern Front 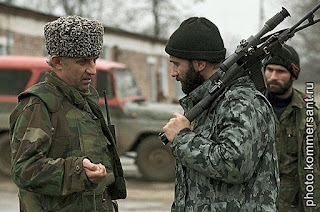 Although most analysts and commentators (myself included) continue to fret about the implications about a reemerging Russia it would seem that it continues to face significant internal challenges. This week saw issues in Chechnya return to the front page of many media outlets as schisms have erupted between some of the warlords running security inside the region. According to a Reuters article one of the Chechen commanders involved in the fighting has leveled accusations against the supposed pro-Kremlin Ramzan Kadyrov of preparing for open rebellion against Russian rule.
Since most of the security in Chechnya has been bought by paying bribes to local commanders such as Kadyrov it would seem that Russia has very little influence in the region. Most of the Russian soldiers in the region remain in their bases and all of local security is handled by private militia forces. The Chechen commander mentioned in the article claims that Kadyrov has simply been biding his time and is now in a position to openly rebel at any moment. He sites the increased clashes between security forces as evidence that conflict is about to erupt in the region. According to the reporter of the article most of the Chechen forces also enjoy privileged access to Russia's newest weapons as part of the bargain that keeps things quiet in Chechnya.

Little has been heard from the Kremlin on this issue. This should come as little surprise , however, as they would hate to give Kadyrov and his forces any reason to attempt a break away. This is especially true considering the fact that Russia has finally reemerged as a world player and a devastating internal conflict would certainly ruin these aspirations.

Maybe the US can learn a lesson from Russia's troubles. Apparently buying off a bunch of local warlords is not an effective means of governing a region in the long run. Current efforts in Iraq would suggest that the US has experienced great success with the 90,000 Iraqi volunteers that are funded by the US. But the Russian example would suggest that bribing and arming some locals will only work so long. It would seem that this strategy is about to fail big time in Chechnya.
Posted by Dr.Doom at 3:50 PM

Despite news to the contrary, Russia's position in Chechnya is far better than it was when the USSR first broke apart in '91. Under the loving car of Putin ally (and half-Chechen) Igor Sechin, opponents of Kremlin rule in Chechnya have pretty much been completely castrated. The main rebel leaders are dead, and the entire province is perforated with Putin-approved ministers and FSB agents.

Still, Chechnya's relative calm is all due to careful managing from Putin in the Kremlin. Even with Putin stepping down, he's not giving up any significant power, and Medvedev isn't likely to want to kick off his presidency with a power-struggle among the Chechnians.

What Russia would like to do - ruthless crackdown, executions, and mass deportations of unwanted persons - is impossible since the USSR no longer exists. The FSB still exists, but the rest of the Russian security apparatus that kept Chechnya in place until '91 no longer exists in the same capacity.

I think you're exactly right about the failings of the "buy off the warlords" thing. Russia isn't happy with it, and the way the Kremlin power-shuffling works almost seem to encourage violent squabbling.

Still, Russia has a few advantages. (1) No one in the world really cares about Chechnya any more, and it never got that much attention anyway, (2) It has a crap-load of forces in the area, (3) the U.S. is likely to give Russia plenty of leeway since the Kremlin has placed the suppression of rebellion in Chechnya as part of the war on terror, (4) Chechnya is a small distance from Russia, making transport and logistics easy.

All in all, Russia's grasp on the Chechen situation has only gotten stronger under Putin. Since Medvedev isn't likely to deviate much from the Putin Doctrine, I personally don't expect much of a shake-up.

Oh, sorry Ambassador, I had no idea that you had recently visited the area and had a better grasp of the situation on the ground than the Chechen security forces and their respective commanders which i was quoting in my original blog post. I do have some concerns over the apparent advantages that Russia enjoys. First, all of these advantages were Russia's in the first two rounds of conflict yet Russia clearly struggled militarily and only managed to establish peace by given loads of autonomy to a local warlord along with guns and money. Second, according to some of the reading from Economic Statecraft a real possibility exists that the "new" Russia is far less neo-imperialist and much more trans-imperialist. This, in turn, would suggest that Russia is far less inclined to maintain these autonomous regions by force or through costly buy offs as this would take away from the largess that current leaders are able to spread around their respective cliques. I suppose that i would also like to mention that my original post was not supposed to imply that Russia and Chechnya are about to go to war but that Russia has plenty of internal problems that should be taken into account when fretting about the re-emergent Russia.

First, I have a summer home and five wives in Chechnya, thank you very much. Still, I wouldn't dare challenge the good doctor's expertise, given the long-standing historical ties between Latveria and Chechnya.

Chechnya is Islamic, tends to hate Moscow, does not consider itself Russian at all, and has a few valuable Russian oil and natural gas pipelines running through it to boot. That, and the fact that Russia doesn't want to let various federal republics start breaking off. Russia doesn't just like Chechnya for the charming local minefields.

This makes Chechnya a serious potential problem, and hence, it gets extra special loving from Putin and the Kremlinettes. One of the main reasons why Russia has so many friggin troops in Chechnya and near Georgia is that they want to keep the warlords fairly isolated and deny them access to any supplies. Even though most of the best rebel leaders are dead, there's always another #2 man ready to take over - just ask AQI.

And by the way, I think the Russian post-imperial/neo-imperial article failed to mention that the rule-by-gazprom paradigm assumes some kind of stability. Putin's first priority was to kick in some teeth, then gather up the profits once things are at a managable level. Russia is always more than willing to use force to quell dissent.

So yes, I'm sure the security guys in Chechnya are nervous. Still, from the Kremlin's POV, it's ok if the warlords want to fight amongst themselves. If Kadyrov and his ilk have a backstab-a-palooza over who gets to bask in the sunshiney goodness of Moscow's "Patrimonial Authoritarian" sun, that's fine.

It's not ok if they start launching terrorist attacks on the Rodina. Even worse if the conflict reignites and you have rekindled violence in Dagestan and Ingushetia.

Interestingly enough, this is one more reason why NATO may want to stay the hell out of Georgia. Would you want these guys for your neighbors?