This week the US Navy has announced several interesting changes to its Americas policy. It recreated an independent fleet to deal with the southern waters, managed to royally annoy Hugo Chavez via a "steam-by", and sent a nifty new stealth boat to help fight the war on drugs.
The big announcement was obviously the re-establishment of the Fourth fleet that would be responsible for all Navy ships, aircraft, and submarines operating in the Caribbean, Central, and South America. Apparently this was a response to the increased role of maritime force in the US Southern Command(SOUTHCOM) are of operations, and to demonstrate US commitment to regional partners. Although seems to be a reasonable move for the US Navy, the question that i have is about the timing of this move. Has there been some unreported increase of activities by pirates and terrorists in the southern hemisphere of America that i am unaware of? It would seem to me that this is another attempt for the US Navy to bully some of its southern neighbours. Maybe the continued rise of Brazil has finally made Navy planners realize they might be facing a near peer competitor of the future on their own continent. Or maybe they are simply trying to give more fiery speech writing material for Hugo. 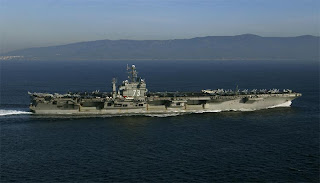 Speaking of giving Hugo more material for condemning the US and pronouncing its eventual burial by the bolivarian revolution: Apparently the USS George Washington aircraft carrier did an unauthorized "steam-by" off the coast of Venezuela a couple of days ago. As expected Hugo was pissed. He denounced it as unlawful and felt compelled to predict that he will bury the old empire of the USA. Interestingly enough he made a reference to the fact that apparently Venezuela and Brazil have been creating the Defense Council of South America. This could be further motivation for the US Navy re-establishing that Fourth Fleet.

Lastly, the US Navy also deployed a sweet stealth ship to Columbia to assist in the War on Drugs. This Stiletto ship has apparently been reaping lots of praise but has generally failed to receive a lot of Pentagon backing. According to InsideDefense.com this new ship class has a very shallow draft, in order to maneuver very close to coastlines, and a top speed of over 50 knots, to easily outrun boats used by drug smugglers. However, so far this boat is listed as unarmed and lacks the sonar capability it would need to detect those crude submarines we have been hearing about. This comes as great surprise to me considering all the difficulties that Navy has experienced in procuring new ship designs. Both the Littoral Combat Ship and the Zumwalt class destroyers have been pushed back significantly. Its nice to see that not all is lost in the procurement effort!!
Posted by Dr.Doom at 4:41 PM