And so it Begins!

After a relative lull in the fighting, it would appear that things have begun to heat up in Afghanistan over the weekend. Sunday bore witness a nice little celebration marking the Afghan victory over the Soviets some 16 years ago. It featured a military procession and lots of dignitaries sitting in stands listening to long speeches. 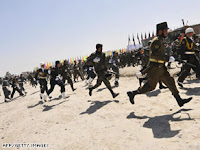 However, this event was also seen as a superb target for the insurgency. In turn, Taliban fighters took it upon themselves to fire a couple of rounds and some grenades at the podium seating President Karzai. Mayhem ensued and Karzai was rushed of the stage as several got killed and insured. Needless to say, the celebrations came to an abrupt halt. In response to the attack, significant numbers of Afghan troops crowded the streets of Kabul on Monday to prevent any further attacks from taking place and to flush out Taliban collaborators.

More importantly, a huge offensive was launched by Marines into Southern Afghanistan on

Tuesday morning to regain parts of Helmand province. This would mark the first major offensive against the Taliban by American forces in years and is designed to drive back some of the gains that the militants had achieved over the winter. According to military officials the Taliban had of course been warned of the assault and had supposedly prepared explosives etc. to counter the advance of Marine forces. In turn, the Marines are utilizing their full arsenal of Humvees, helicopters, and airstrike to prevent any significant resistance from taking place.

It would seem that fighting in Afghanistan is about to enter a new phase. Not only have the Taliban become bolder in their attacks but the US military has decided to strike deep into Taliban territory to weaken the insurgency. Although nothing concrete has manifested, it should be clear that the next several days will bear witness to some crucial events that could determine the course of the fight in Afghanistan. Should the Marine offensive proof successful a significant part of the Taliban support base could be undermined. On the other hand should the Afghan government prove incapable of providing security for its own president during national celebrations, the Taliban might be able to prove to the people that it is there to stay. In turn, things could turn very sour for NATO troops in future months.

And as an interesting note, the Taliban in Pakistan is meanwhile still upholding a ceasefire agreement with Islamabad. Under that agreement, Pakistan is to keep its troops out of the tribal areas.

So basically, while the Afghani Taliban is taking potshots at the president of Afghanistan and probably kicking off their Spring offensive, they're asking the Pakistani government to stay out of the area where they plan and prepare for these attacks. Sounds a bit suspicious.

Then again, this blog has earlier wondered whether the Taliban is necessarily as united an entity as it was when the U.S. first moved in in 2001. If the Taliban isn't necessarily united, how well can it coordinate a new round of attacks?

Will the Taliban and tribes in Pakistan seek a deal with Islamabad, preferring the option of political representation to violence?

So, does all this mean that we have a larger, more coordinated ISAF force dealing with a smaller, less coordinated and divided Taliban offensive?

Guess we'll have to wait and see.