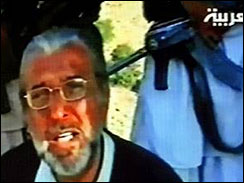 We never thought we would see this guy again, but Tariq Azizuddin--Pakistani Ambassador to Iraq, who had been kidnapped last February--was seen in a video shown on Al Arabiya TV channel. In the video, Azisuddin pleaded for the Pakistani government to meet his captures demands to release Taliban prisoners.
Unfortunately for Mr. Azizudden, a senior Pakistani government official said, “As things stand right now, we are not going to negotiate with militants and we can’t release people [already in custody] in exchange [for Azizuddin]."
Past events, however, suggest that the captures demands may be met. Last summer, the Pakistani government gave into terrorists requests, releasing some 20 Islamic militants for about 250 military and paramilitary Pakistani hostages. Given the success of this exchange, Taliban leaders are likely to believe that this tactic will work in the future.

On the opposite end of the spectrum of threats, but on the same day, Pakistan--at an undisclosed location--successfully test-fired a long-range ballistic missile with a range of 1,245 miles.

It seems like Pakistan is making its way towards offering an effective counter-balance to India's nuclear capabilities. If only they would exert such energy towards fighting the terrorists' stronghold that exists in their own country!
Posted by Mr. Bojangles at 1:52 PM

Because having 80,000 troops in the area that have suffered over 1,000 casualties in 4 years of operations is clearly not effort enough!! Maybe its just that the region has always been semi-autonomous and therefore is not likely to bow to the central governement. Plus the governments only incentive to subdue the province is to keep American checks coming. Its not like the Pakistani people want the conflict to continue.

Of course they don't want conflict to continue, and achieving stability in the region is not simple, but it is also not impossible, is it? In this type of warfare, troop levels are critical, but it is not the only important factor. Having their own incentive to end the conflict, as you mentioned, is necessary. Having an effective strategy and tactics that are suited for fighting insurgents are important as well. Perhaps it is these later factors that are preventing Pakistani success.

Couple thnings. One, I wonder if the PPP/PML-N coalition feels the same way about this guy as Musharraf. Two, didn't the government say they were going to distinguish themselves from Mushy by engaging the Taliban militants in dialogue?

The U.S. is going to be watching this with interest, probably to see how the new government handles a more assertive and violent Taliban.

As to achieving stability in the tribal areas...good luck. The best practice has been to avoid pissing the tribes off and occasionally ride in, crack a few heads, and then quickly withdraw. The whole Islamist/Taliban/U.S. occupation/potential instability in Pakistan's government thing has changed the context, but not the core issue -- the tribes have never really considered itself responsible to Kabul, London, Washington or Islamabad.