Although the Syrian government has agreed to a cease-fire, there have been multiple reports that the conflict has intensified. The conflict that has been ongoing for over a year and has costs the lives of thousands of citizens. Some estimates report civilian death tolls at over 9,000. These figures include the deaths of approximately 500 children. There are also large numbers of internally displaced peoples, refugees that have fled the country, and approximately a million Syrians which need humanitarian aid. After extensive debates within the UN Security Council over the issue, the United Nations and the Arab League were appointed to negotiate for the settlement of the conflict.

According to the United Nations-League of Arab States Joint Special Envoy, all violence should end by April 12th. The Syrian government already agreed to a cease-fire, but many question how committed the government is to complying with the Special Envoy’s plan. There were multiple reports on Thursday of increased violence in cities throughout the country. Meanwhile, the Turkish government reported that there has been a vast increase in the number of Syrian refugees fleeing across the border.

The Syrian government has agreed to withdrawal military forces from predominate cities across the country. The government reported that a “partial pullback” is already underway for the cities of Deraa, Idlib, and Zabadani. A full withdrawal of Syrian troops from the major cities has been scheduled for April 10th. Directly after the removal of troops, there is to be 48 hours when all forces engaged in the conflict are to stop fighting (government troops and opposition forces). This period of halting fighting will transition into an official cease-fire on April 12th.

The UN is attempting to maintain pressure on the government to fulfill its promises. There is a UN team in Damascus so that they can deploy personnel to monitor the cease-fire. Moreover, Mr. Annan is scheduled to arrive in Iran on the 11th. The pressure on Syria is not only to enact the cease-fire, but also to implement the peace plan fully. The peace plan includes halting the violence, allowing humanitarian organizations access, beginning political dialogue that is inclusive, and releasing jailed protestors. 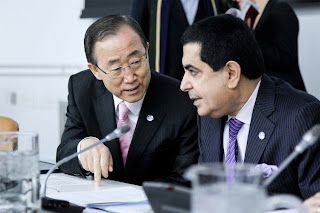 Both Secretary-General Ban Ki-moon and Nassir Abdulaziz al-Nasser have stated the importance of the global community to support the United Nations-League of Arab States Joint Special Envoy to Syria. It is clear that the probability of success for the peace process and a resulting inclusive political system are dependent on continued support from the international community. However there are multiple obstacles to this support. Nations have come together due to the violence exhibited by the Syrian government against their citizens. As the peace process moves forward, there could be division in the coalition of nations supporting the current initiative, especially on the topic of democracy.