No longer. Just in this week, John Bolton has been announced to replace H.R McMaster as national security adviser for President Trump. How John Bolton will affect the future world’s security?  Specifically, how this will affect the future relationship between the U.S and China, Russia? In terms of future war, many causes can be considered; two of them will be "Grey Zone" and "Military Technology".

China and Russia is touching and involving in a “grey zone” may be considered as one of the reason of future war. As we know, “grey zone” is a place where aggression and coercion work just below the level that would risk military confrontation with the West. Russia has blended force in Ukraine and intervenes in the region regularly. Unlike Russia, China is more seriously with touching the “grey zone”. Islands, reefs and shoals are the “grey zone” which China has been involved in.
Touching the “grey zone” in some degrees is breaking the international order and rules. This will make the U.S begins to worry about the China and Russia’s foreign policies and also might take some actions to prevent the intervention by making more military agreements with the U.S allies. This will make China and Russia feel uncomfortable, then they will think about more actions to revenge. Therefore, touching the “grey zone” is such a vicious circle, this also become a cause of the future war. 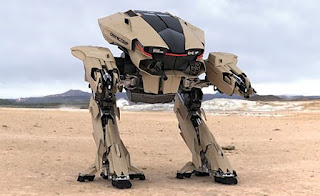 Besides the geopolitics, as Singer and Cole also mentioned, technologies will be a huge threat for the future. Even China and Russia’s military technologies could not compared with the U.S, however, they continue spending lots of money and efforts to invent recently. Now both countries have used asymmetric-warfare strategies to create “anti-access/area denial” networks.

Developing military technologies is necessary for every country, however, if you think about the purpose of China and Russia’s military technologies, it is not hard to find a common answer is that to go against the U.S. The aim of China is push the U.S out of the pacific region, and make sure that the U.S could not involve in the South China Sea issue anymore. Then in terms of Russia’s aim is to show its power from Artic to Black sea.
According to both countries’ aims, it is impossible for the U.S to give up intervening in the sea issues.  Moreover, the U.S will continue its development in military technologies as well, then make sure that they have enough abilities to maintain its leadership in the world.