A Robot Fly on the Wall 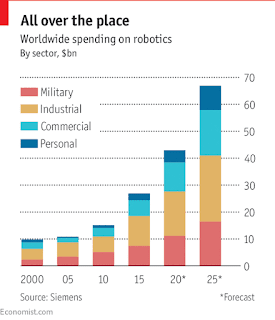 From Rosie the Robot on the Jetsons to Arnold Schwarzenegger's Terminator, humans have been fascinated with autonomous robots for decades. The more lifelike the more intriguing, and science fiction is all about futuristic robotics. Due to developing technologies the idea of these human like robots are becoming much more science and less fiction. Robots can be specifically designed to do a number of particular tasks. Of late many developers are spending more money on designing robots to perform military tasks. This has caused concern for a number of skeptics who are fearful of the capabilities of “killer robots.” Several skeptics have reached out to the United Nations requesting a ban on the development of these killer robots. Perhaps it is only a matter of time before robots work as autonomous soldiers. But in the meantime it is important to highlight other reasons for robotic developments in the military arena.

One of the more fascinating robots on the market is the Robobee. No larger than a piece of pocket change the Robobee is designed after the biological makeup of bees. Researchers at the Wyss Institute are developing these miniature robots to perform a number of tasks related to disaster relief, agriculture, reconnaissance, among others. Originally designed to help with bee species becoming extinct, these micro-machines are being considered for much larger feats.
The capabilities of the tiny machines are possibly endless. Already designed to be able to fly, hover, perch, and swim underwater these insect-like robots can go virtually anywhere. 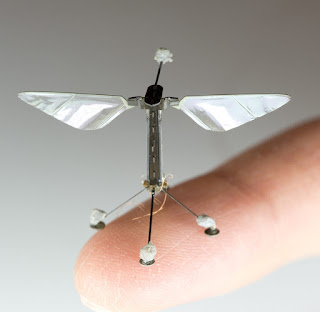 Exclusive rights to the Robobee remain with Harvard’s Wyss Institute. But it is likely to see these miniature robots being sold to military organizations and corporations around the globe. Equipping the Robobees with cameras and/or listening devices will allow organizations to send in spies to collect espionage unnoticed. If perfected this could give intelligence collecting organizations an upper hand. Drones are already used as robot intel collectors, but they are large and visible from a distance. If used effectively the Robobee is essentially invisible to the naked eye. A timeline of Robobee usage for espionage and reconnaissance missions remains unclear but it is possible in the near future to have robot flies on the wall.

For more on the Robobee visit: https://wyss.harvard.edu/technology/autonomous-flying-microrobots-robobees/
Posted by Mr. Aggie at 2:06 PM