Unconventional Warfare as a Strategic Option 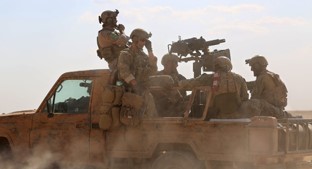 Unconventional warfare (UW) is not waged solely by Special Operations Forces (SOF).  To truly be successful, it must incorporate all aspects of national power to include diplomatic pressure, economic coercion, information dominance and military engagement.  Russia’s recent use of what their support for Houthis (although they still deny arming them).
some have termed ‘Hybrid Warfare’ is an example of how an unconventional warfare campaign can secure national interests.  Iran is currently locked in an unconventional warfare campaign in Yemen as well.  Iran has supported Houthi rebels with drones, ballistic missiles, and small arms.  Iranian officials have even made public

Indeed the 2017 National Security Strategy (NSS) address the issue of unconventional warfare.  In the 2017 NSS, the DoD is specifically tasked with sustaining its competencies in irregular warfare (IW)−UW is a subtask of IW – and acknowledges the need for long term planning.  The NSS further highlights the need to combine the tools of economic, information, and diplomatic statecraft as an important part in a “broader strategy to deter, coerce, and constrain adversaries.”  To meet the intent of the NSS, preparations must be made well in advance.

To mount a successful UW campaign, SOF soldiers must invest significant time and effort in the potentially denied area.  This requires SOF to conduct operations in countries prior to hostilities, during steady state operations.  It is during this time when SOF troops make significant contributions in developing the human and infrastructure capital that is needed to execute a UW campaign.  Trying to establish a network once a conflict has started greatly increases the chance of failure and limits the use of UW as a strategic option.


Unconventional warfare is not the panacea for international challenges.  However, it is an effective option when confrontation between the U.S. and another state is deemed unfeasible or politically imprudent due to the potentially catastrophic consequences.  Indeed, the use of UW to coerce or disrupt an adversary may likely prove the best option when it looks like a military confrontation is inevitable, such as preventing an attack on a U.S. ally.
Posted by Ares three six at 11:49 PM