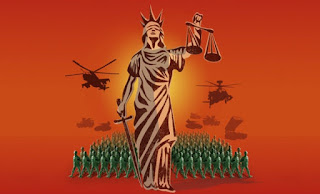 But aren’t there legal ramifications to this? A country’s sovereignty is challenged when others intervene, especially when not called upon to do so. Under international law, using any formal military forces in a country that the United States is not already at war with, in fact, constitutes as an ACT of war. The lines become blurred when distinguishing between national and international. A consistent motto of the US, some would say is “Whatever it takes!”. Whatever it takes to protect our nation or help struggling ones, we will deal with the consequences later. Now it is true, that the majority of the time there is a larger forum of domestic and foreign support which constitutes the bending of rules sometimes.
What does this mean for national credibility? It depends each time.  And do the means outweigh the costs? Remember, whatever it takes right…
After the fallout of Operation Gothic Serpent in Somalia (estimated 300-500 killed), the US decided not to intervene in the Rwandan genocide (estimated 500,000-1,000,000 killed).  Was the ‘you live and you learn’ approach justified? Interventionism will always bare this inevitable question and the matter of civil liberties and accountability will remain disputed. If operations do not succeed is it worth defending others, when it is our troops on the ground? Well, one way to minimize casualties and resources is through the use of small, elite SOF units.
The use of special operations forces will always remain on blurred lines.
Thomas Aquinas’ Just-war theory inspired a set of three criteria:

“The world is flat, except when it is round” – Fredric Manget

Posted by Maxwell Chesham at 4:24 AM