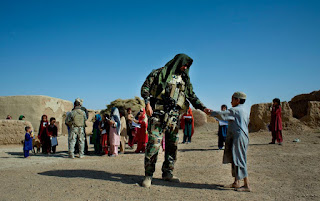 My esteemed colleague, Alice Reichert, recently argued that the United States Military is focusing far too much on COIN and not nearly enough on the fundamental skills of conventional war. Ms. Reichert is concerned that the United States is losing its ability to wage a major war against belligerents such as North Korea. Of course, no commander in their right mind would completely eschew the training of conventional skills, especially when these skills form the foundation for fighting Big War and for conducting COIN. We must however remember that the impetus behind FM3-24, the Surge and the wide adoption of COIN was the failure of pure conventional tactics in a changing battlefield.

First and foremost, COIN has been successful, both in older historical contexts and in recent wars. The British of course are famous for their successes in Malaysia against the Malayan National Liberation Army and in Northern Ireland against the Irish Republican Army (their day did not come). The United States has been successful in the Philippines after the Spanish-American War, during the Reconstruction after the Civil War, and yes, most recently in Iraq. Indeed, careful use of COIN tactics should prevent insurgencies in the Western Sahel from becoming as strong as examples in the Middle East. Finally, the U.S. Military should not abandon just as it is on the cusp of victory, as they did after the Tet Offensive during the Vietnam War. In that example, the U.S. Military, in conjunction with the Army of the Republic of Vietnam (ARVN) largely crushed the Viet Cong (VC), but withdrew from the country (a political move) before total victory could be achieved.


It is said that armies always prepare for the last war that they fought. In the interwar period, several countries developed heavy line breaking tanks for extensive trench warfare which never materialized again. After World War II and the Korean War, U.S. military leaders attempted to fight the same war in Vietnam. Some military scholars, such as Gian P. Gentile, are concerned that the U.S. is placing too much emphasis on COIN in the face of future threats of conventional war; however, asymmetric warfare is not behind the U.S. yet. The U.S. must prepare for the wars which it is now faced rather than the prospect of a Big War with China, Russia or North Korea. Of course, completely focusing on COIN at the expense of conventional warfighting capability would be a mistake: the military must continue to train soldiers in the fundamental skills necessary for conventional war. Nevertheless, we must continue to engage in COIN for the foreseeable future: for as long as there are insurgencies, militaries must be able to crush them and provide security for the state. We are winning, but we haven’t won yet.
Posted by Titus Larticus at 9:08 PM