The South China Sea is one of the most hotly disputed areas of the world. There are six different countries at odds over the South China Sea. China, Vietnam, Malaysia, the Philippines, Taiwan, and Brunei all have competing territorial and jurisdictional claims in the region. Although China insists it has indisputable sovereignty in the region, the United Nations Convention of the Law of the Sea (UNCLOS) has ruled in favor of Vietnam, Malaysia, the Philippines, and Brunei on their claims of their exclusive economic zones (EEZs). They have this right under UNCLOS. 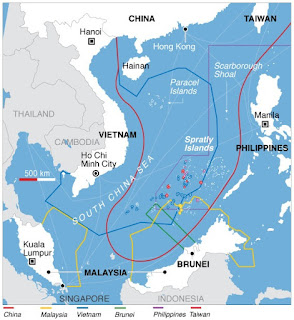 China’s claim has no legal basis. This is only disputed by China itself. For China, the islands of the South China Sea hold much more strategic value than any land border. A claim to all the sea gives China a power projection into the Indian and Pacific Oceans as well as control over some of the busiest shipping lanes in the world. Don’t forget about the hydrocarbons located there. It has been estimated that the amount of oil and natural gas in the South China Sea is similar to the Middle East (Stavridis, 2017). The area is so important to China that they ignore legality and are prepared to back its claims with military power. What is concerning about a military conflict in the South China Sea is all the artificial islands China has already constructed plus the islands they have beefed up militarily. Imagine a hundred islands acting like unsinkable aircraft carriers scattered throughout the region. This definitely shifts the balance between two competing militaries.

What should the United States do in regard to the South China Sea? First, communications between the US and China need to remain open in order to reduce the chance of inadvertent collision, especially between China and its immediate neighbors. The US also needs to strengthen its relationships with key allies and partners in the region. They will be essential to US policy on the South China Sea. The US should remain steadfast in reminding the international community how China’s approach to the area is against the tenets of international law. They should also finally sign the UNCLOS in order to legitimize themselves in arguments on international sea law. Finally, the US should continue freedom of navigation operations to show China that their unjustified historical claims hold no water.