In Michael O’Hanlon's book The Science of War: Defense Budgeting, Military Technology, Logistics, and Combat Outcomes, he opens his first chapter on defense budgeting and resource allocation by posing the question: Does the US spend too much on defense? If so, how can we scale back a bloated budget? He goes on to examine approaches to the defense budget: William Kaufmann's "top-down" approach (which starts with defense budget and subdivides it into various pieces) and the Congressional Budget Office's (CBO) "bottom-up" approach (which estimates costs per units directly and results in a proposed budget).


In addition to the top-down and bottom-up approaches, we could evaluate the US defense budget by comparing it against those of other countries. However, it's not particularly helpful to look at the US defense budget as compared to those of other countries in order to gauge whether our spending is excessive, since our budget is intentionally larger by a wide margin. The US doesn't seek to match defense spending by other countries, but to maintain clear global hegemony. So, in order to get at a response to our question, examining how defense dollars are spent is a reasonable starting place. This handy graphic summarizes where our defense dollars go:

So, are we spending too much on procurement? How about research and development (R&D)? Should we dole out pay cuts to our military personnel in order to reduce defense spending? In considering how to go about determining the answers to these questions, it is not a stretch to imagine that those responsible for determining the procurement and R&D budget allocations would argue that not only are they not overspending, they aren't receiving enough funds to cover all their projects. Reducing military pay would almost certainly be an exceptionally unpopular proposition, although a reduction in spending on military personnel will likely come to pass incidentally as deployed troop levels go down with the wrap up of ground operations in Afghanistan. So, without engaging in a tug of war with any of the entities presented in the image above, what options are available for reducing defense spending? 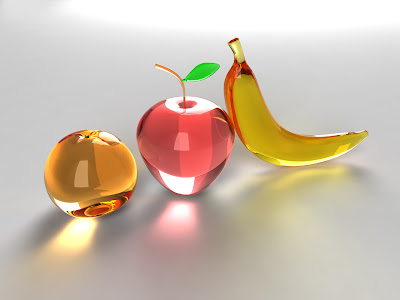 To address that question, let's indulge in an analogy. Let's say you enjoy fruit; as such, you have apples, oranges, and bananas. Let's further say that you are all stocked up on oranges and bananas, but running low on apples! This won't do, so you approach your supplier to make a request for a few more of those tasty, refreshing apples. Your supplier's response is to give you more of all three fruits. Well, this is a humdinger of a pickle, because you don't need more oranges or bananas - and given that you don't need them, you'd rather not have to pay for them. Welcome to the US defense budget's system for allocating funds to each of the armed forces. If the air force gets more funding for expensive jets and high tech drones, then the army gets more as well. While funding is not strictly equal across the board, it's pretty close to being evenly distributed between the services (see graphic below). 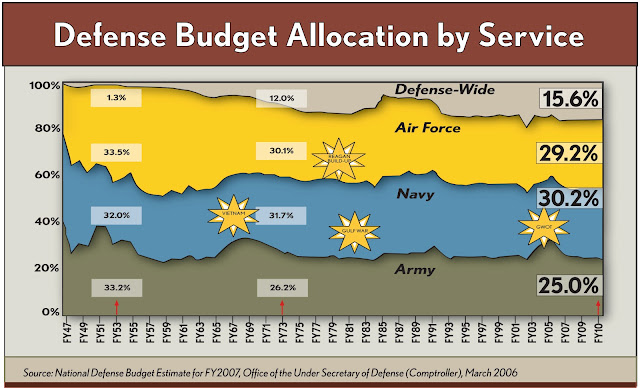 This being the case, there is a strong argument that allocating defense funds according to annually assessed budgetary requirements (number of apples, oranges, bananas required) makes more sense than allocating what may be an arbitrary percentage of the budget (equal number of apples, oranges, bananas) whether or not it's necessary. If increasing the funding distributed to one service necessarily raises the cost of another service, even if additional funds aren't essential to that second service, then we're allocating our budget inefficiently. It may be time to consider the possibility that we have taken budget uniformity too far.