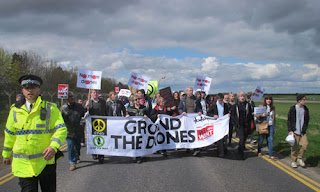 Saturday marked the first nationwide protest of Britain's drone use. About 400 protesters took part in a march from Lincoln to the Royal Air Force Base at Waddington in Lincolnshire. This historic event was prompted by the British Ministry of Defense admitting that they had flown armed drones remotely from the UK.

Previously operated from Creech Air Force Base in Nevada, the RAF has decided to bring their operations back to the UK in order to take advantage of the opportunity to have shifts in multiple time zones.

So far, Britain is the only other nation the U.S. has permitted to purchase armed MQ-9 Reaper drones.
Though primarily used for surveillance, these models can be armed with Hellfire missiles and 500 lb laser-guided bombs. 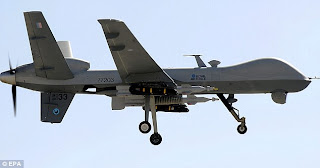 Despite protests from activist groups claiming that the use of UAVs makes it all too easy for policymakers to launch attacks without oversight or accountability to the public, the RAF stands firm in their statement that the Reapers "adhere strictly to the same laws of armed conflict and are bound by the same clearly defined rules of engagement."

The RAF says that another benefit of repatriating the British-owned and operated drones will allow for greater control over their use. Previously, British pilots had been embedded with the US Air Force (British pilots are still required to follow the UK rules of engagement even whilst embedded in the US armed forces).

While good for allied relations, this collaboration muddles the issue of responsibility for specific strikes. For example, British pilots are given credit for firing missiles even when using borrowed US drones, however any casualties resulting from these strikes have counted towards the US figures. This has skewed the data and analysts are still in the process of sorting it all out. Hopefully the added separation of British forces operating from the UK will help to clarify the issue.
Posted by Ndank ndank mooy japp golo ci naay at 12:29 PM