A King for the Dutch Throne

The Netherlands have a king for the first time in over 100 years. Following the example of her mother and grandmother, Queen Beatrix has decided to abdicate after a 33-year reign. The Dutch crown has now passed on to her son, Willem-Alexander and his Argentine-born wife, Maxima. The simple ceremony was celebrated by hundreds of orange-clad supporters. 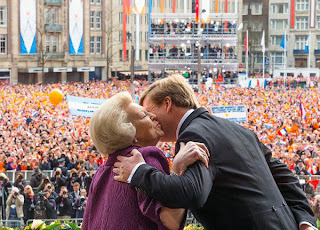 The Dutch monarchy enjoys a strong support base within the Netherlands. Less formal than their British counterparts, royals from the House of Orange-Nassau are wildly popular. The new king, though a bit of a partygoer (he was previously nicknamed "Prince Pils") in his youth, has a reputation for being responsible and professional while maintaining the ability to connect with the common people.

The U.S. and the Netherlands have had excellent diplomatic relations since 1782. The Dutch supported the U.S. declaration of independence from Great Britain and the ensuing American revolution. The two countries share cultural ties as well as common values of human rights and individual freedom. The Dutch have continuously worked with the U.S. to promote these values around the world, both bilaterally and through international organizations such as NATO and the UN. The Dutch have fought alongside the U.S. in many different arenas, including the Korean War, the first Gulf War, and the 1999 Kosovo air campaign. They have also participated in multiple NATO missions and the "smart defense" initiative.

The new king, however, will not be able to influence affairs of the state. According to their 1848 Constitution, the Dutch monarch is "inviolable," meaning that he or she must be politically neutral and leave the ministers accountable to Parliament for government policy. The stated role of the monarch is, in addition to performing official tasks as the head of the state, to "work actively on behalf of the people of the Kingdom of the Netherlands, playing a cohesive, representative, and encouraging role."As such the monarch is responsible for promoting social stability and progress within the community and acting as the representative for the Kingdom of the Netherlands during state visits at home and abroad. 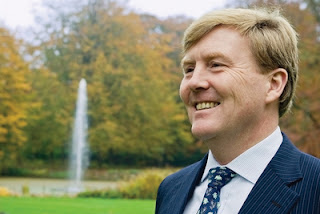 King Willem-Alexander has been close-lipped in his political views thus far, instead focusing on his career as a water management specialist. Since 2000 he has been the chairperson of the Water Advisory Committee (formerly the Dutch Integrated Water Management Commission), an independent committee dedicated to advising ministers on water policy and its social and financial impacts. In 2006 he was asked by UN Secretary-General Kofi Annan to takeover as chair of the United Nations Secretary-General's Advisory Board on Water and Sanitation (UNSGAB), which in addition to advising the Secretary-General on water policy, lobbies around the world for practical and achievable measures to meet the Millennium Development Goals on water and sanitation.

Maybe the Patterson School could extend an invitation to His Majesty to join our 2013 fall conference on water issues...