Who's the New Kid?

On February 26, The United States Air Force Secretary revealed the new Long Range Strike Bomber at the Air Force Association's Air Warfare Symposium. Although only unveiling an artist's concept design of the next generation bomber, it proved to be visually impressive. The official designation of this new Bomber is the B-21. The contract was awarded to Northrop Grumman, who previously built the B-2. While there are no existing prototypes of this aircraft, the illustration/artist rendition of the Bomber seemed to resemble the B-2. Northrop Grumman claims that the B-21 "has been designed form the beginning based on a set of requirements that allows the use of existing and mature technology."

The B-21 is very important to the ever-changing atmosphere of the 21st century and will prove vital to our national security and national defense. The U.S. Air Force plans to field the new bomber in the mid 2020's.

Keeping this in mind, building this new stealth bomber hasn't been easy. The fact that this announcement and designation was made was a big deal. This is because there has been a struggle getting it built, and probably even more important, it proves to push America's defense apparatus forward unlike ever before. 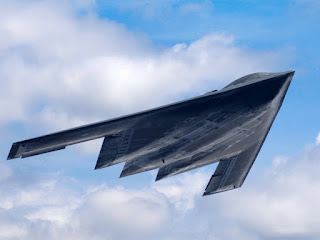 
The B-21 is an imperative part of the future of the United States Air Force and out nation's air power. The unveiling of the B-21 represents a partial solution for emerging area-denial and anti-access (AD/A2) capabilities. As a result the B-21 Bomber provides the U.S. with warfare capabilities that would override the things that would "deny U.S. Forces the ability to come within hundreds or even thousands of miles of an enemy's territory." The B-21 has technologies are so stealth that it will be able to go entirely unnoticed and be undetectable.

The United States must be active in developing new technologies to improve our air warfare capabilities, especially at a time where asymmetric warfare leaves us with such ambiguous enemies. The B-21, once fully functional and available for military use will play a vital role in helping our nation make significant strides in defeating these enemies.
Posted by YouKnowNothingDonaldTrump at 8:56 PM