Robotics is everywhere. It makes life easier, faster and more convenient. The military has been a huge part of this. Some of the every day technologies we use are straight from the military, like the GPS on our phones. The military also focuses on the fact that robotics can be safer in combat. Not only are they safe, they are successful. With this in mind we’ve seen an increased use of drones over the past few years under President Obama. At least once a month in the news reports that another terrorist site has been struck by a successful drone attack. Examples of this are the March 9, 2016 drone-strike on ISIS commander Omar Shishani and the March 7, 2016 drone strike on Al-Shabab that reportedly killed 150 Somali extremists.[1] All of these successful attacks are completed without putting a soldier in potential danger. Drones are piloted from remote areas. While pilots in fighter jets may replace a soldier’s presence on the ground in combat zones, a pilot still encounters the possibility of bodily harm. A drone completely removes this potential. 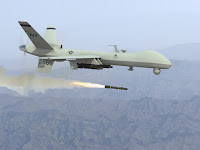 In 2012, Leon Panetta used this approach to try and cut the United States military budget by $487 billion over the next decade.[2] With an increased emphasis on drones, the budget called for reducing the need for additional F-35’s and decreasing the size of the army by 80,000 troops.[3] In association with the cuts, drone Combat Air Patrols (CAPs) would increase by 30 percent.[4] In 2015, the new proposed budget allocated $2.9 billion out of $48.8 billion for aircraft and related systems across the services for a variety of unmanned systems.[5] This is almost double the $25.6 billion for shipbuilding and maritime systems.[6]

How far can military electronics go? Drones can only do so much until you need to send combat troops in. So will we ever see a time when we can replace them too?  Unfortunately, it seems that the closest we will get in the near future is a robot dog that sounds like s a lawnmower and carries heavy supplies next to troops.[7] Until the distant future we will just have to continue to watch movies like Iron Man or the reboot of RoboCop and just leave the possibilities to the imagination.