Out of the Ashes of the Hindenburg: Blimps Rising 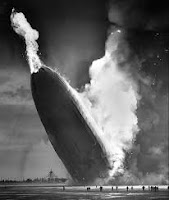 Since the Hindenburg went down in a ball of fire on May 6, 1937 in New Jersey, the blimp is thought to have reached its limit as a means of advertisement and broadcasting above sporting events. Over the course of World War II, however, the Goodyear Tire and Rubber Company produced over 100 blimps for the US Navy, known as “K-ships”, used as convoy escorts, submarine and mine spotting, and rescue missions. Today, several companies have taken steps toward a “blimp revival”. A Lockheed Martin - Hybrid Enterprises partnership and Airlander with an airship-plane hybrid are among those that are competing to build these next generation blimps.

Lockheed Martin’s proposal is to have blimps in Africa reaching remote mining locations, potentially saving mining companies millions of dollars. For example an estimated $7 billion could be saved by not building infrastructure such as roads to reach a $20 billion iron ore plant in Guinea. The blimps are currently going through Federal Aviation Administration certification, and are not scheduled for launch until 2018. While the blimps have not been characterized as being used for other purposes just yet, with capacity for carrying 20 tons, and speeds of 60 knots, there may be a potential for the military to use such blimps to supply forces in a timely and cost effective manner to remote regions. “It will land on water, sand, a filed, even ice,” according to a Hybrid Enterprise’s spokesperson, and without an airport, it just needs the area of a two or three football fields. The new blimps are expected to cost tens of millions of dollars each. When compared to Lockheed’s C-130 Hercules, each carries about the same tonnage and the Hercules costs about $30.1 million per unit, however the blimp carries that added benefit of not needing an airfield or any infrastructure to reach the location.

In “The Science of War”, there is discussion about the Rwandan genocide: while many called for swift action, the estimated time for deployment with all personnel and goods would have been close to three weeks. In Chris Hill’s book “Outpost”, the former Ambassador talks about celebrity visits taking up airfield space that could be used for supplies and helping refugees. Both of these situations could be alleviated by the capabilities of Lockheed Martin’s ability to land in remote areas without airfields. Blimps could carry supplies and personnel where regular fixed-winged aircraft either cannot go or where they are being obstructed, while also potentially replacing the truck as the dominant mode of supply transportation. This would allow greater flexibility for the military (whichever branch chose to utilize them). While blimps could be somewhat vulnerable, the blimps could be supported by air from aircraft carriers or bases within range, depending on where they would be operating.

Posted by The Sundance Kid at 6:09 PM