While many counterterrorism operations focus on threats from abroad, there is a growing danger presented by right-wing white supremacist groups. In early April, a Homeland Security intelligence report meant for local law enforcement was leaked to the press. The report described Operation Vigilant Eagle, a plan to target white supremacists and “militia/sovereign-citizen extremist groups.” The DHS plan also focuses on veterans of the wars in Iraq and Afghanistan. While Homeland Security Officials are right to focus on the more militant white supremacists, a recent Newsweek article indicates the threat may be a bit more insidious.

These are not your grandparent’s white supremacists… 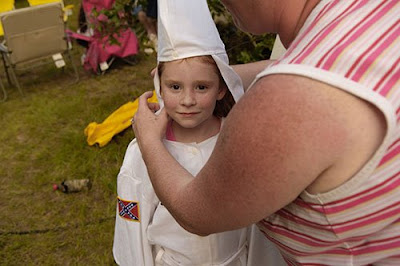 The Newsweek article quotes Thomas Robb, leader of a KKK offshoot called the Knights Party: “Do you know why people are so afraid of us? Because we’re so normal.” White supremacist groups have long found the Internet to be a powerful recruiting tool to spread their ideology, connect disparate groups and plan events. Now, it seems, they have gotten smarter about it.

In a strategic move (one that the Republican party should mimic to increase membership – ed), white supremacist leaders have encouraged members to tone down the rhetoric and extremist speech online so as not to frighten off potential new members. From the Newsweek article: “During the Knight’s event in Arkansas, Roy, a guest speaker, advised white recruiters to ‘keep it subtle. Don’t hit ‘em with anything too hard right off the bat or you will shock them. Find a chink in their armor and make friends. If you are too radical, they won’t listen.’”

Why now?
The reasons for the increased focus on white supremacist groups are neatly summed up in the DHS report. “...the economic downturn and the election of the first African-American president present unique drivers for right-wing radicalization and recruitment.” Additionally, blogs and message boards are buzzing with the possibility of backlash against Mexican immigrants over the Swine Flu H1N1 virus epidemic. The debate over the replacement of U.S. Supreme Court Justice David Souter will also be a likely source of rage for hate groups.

So now what?
The scariest part of this problem is that President Obama’s election may have shifted focus away from education about racism. We can’t allow the problem to fall off America’s radar. We can’t let our wake-up call be a white supremacist terrorist attack on American soil.
Posted by Thomas Paine at 12:58 PM