Pakistan: Where Education Could Pay... 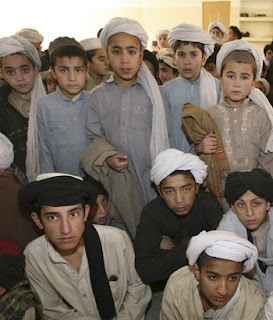 The big problems are still present. The government has little to no control or influence in a good portion of the country. A recent NY Times article points out that basic needs are not being met in many areas and that this has created a vacuum that is being more and more occupied by the Taliban. It is tough to say that Pakistan should spend less on fighting and more on providing basic services when it is already struggling to keep the Taliban out of Islamabad. But the Taliban is able to create schools that are not going to provide an education that is conducive to creating productive members of society at least in terms of supporting the Pakistani government. The sympathy for militants and extremists is only going to grow in communities and regions where these schools are present. Obviously a certain amount of control in a military sense needs to be present before Pakistan can hope to provide a more well-rounded education, but Pakistan does need to pay attention to these needs in order to form a more stable solution to the current conflict within its borders.

It is admittedly naive to say that building schools will be the water to the Taliban's Wicked Witch of the West but I still think attention needs to be paid by both the U.S. and Pakistan to the medium and long term campaigns to bring an end to the violence in the region. Basic services have an important role to play and investment now will pay dividends down the road.
Posted by Fork at 11:51 PM