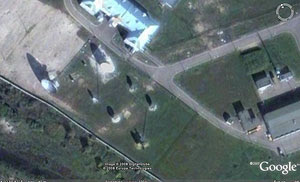 Apparently flying rusty bombers over Alaska or close to US aircraft carriers is not the only thing that Russia has been up to. According to an article in the Economist Russia has been installing some pretty interesting spy antennas close to the border with Estonia, close to Pskov. This would allow the Russians to gain access to signals coming in and out of a major communications satellite that covers the region known as Atlantic Ocean Region-West. The satellite, Inmarsat 4-F2, carries a huge amount of voice and data traffic, both private and government, some of it secret. Apparently any data you send and receive via USB in Europe or America would go through this satellite. The discovery of the Russian efforts to install these eavesdropping stations was actually done through Google Earth which provides a nice picture of the entire set up. The article also notes that the island of Hogland has recently been declared a border zone by the FSB, thereby restricting access, and would be the only other area within Russian territory that is far enough West to allow Russia to monitor the satellite. No picture is available in high enough resolution to confirm any activities on the island, however. The new station in Pskov is apparently composed of several large satellite dishes, a guard tower, barracks, and a huge wall to screen it from outside view.

It would seem that Russia is continuing its efforts to expand its Cyberwar capabilities. This revelation should be an important heads up to western governments to become a little more concerned about securing their information access. Russia has experimented in the past with Cyber attacks on some of its smaller neighbours, Estonia in 2007, that proved it is very capable. Knowing that Russia can now eavesdrop at will on a ton of important information is certainly an issue that needs to be addressed. Good job by whoever is the guy with enough time to scan every bit of ground on the Russo-Estonian border with Google Earth to give the world a heads up on this issue.
Posted by Dr.Doom at 3:50 PM