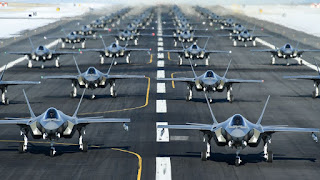 Today, February 25th, Australia and the United Kingdom opened the F-35 Reprogramming Laboratory, located at Eglin Airforce Base (AFB) near Valparaiso, Florida. The opening of this joint Australia-UK Reprogramming Laboratory is the latest development in advancing Australia's F-35A Lightning II capacity. Australian Defense Minister Linda Reynolds stated "The Reprogramming Laboratory produces Mission Data Files (MDFs) while complies information about the operating environment and assets in the area, before being loaded onto the aircraft pre-flight using portable hard drive . . . Combined with the aircraft's advanced sensor suite, this provides the pilot with a clearer battlespace picture." Australia and the UK F-35s will have these MDFs installed; final operational capacity is expected by 2023.

The F-35 Joint Strike Fighter (JSF) Project originally comprised of nine member nations. The original nine members were all at different tiers within the program: the US as a primary customer and financial backer; The UK is the only Tier One partner; Italy and the Netherland are Tier Two; Tier Three comprised of Australia, Canada, Denmark, Norway, and Turkey. Despite the removal of Turkey, discussed below, the JSF program has expanded to four more nations—Japan, Israel, South Korea, and Belgium.

This economic and security project has cost over a trillion dollars, and its members encompassed forty-six percent of the global economy. Many liken this project, not without cause, to China's Belt and Road Initiative (BRI). Modern fighters require thousands of subcomponents drawn from many different technologies and a complex supply chain. Unsurprisingly, the F-35 comes with considerable logistic and technological headaches foreseeable from the world's first fifth-generation fighter. Yet once a country has several F-35s in its fleet, switching to a less advanced competitor is unappealing. The JSF project goes beyond the economic coercion the BRI is accused of; now, a JSF project member's very security will be reliant on the US for decades to come. Such leverage has already been used. In 2005, the US suspended Israeli access in retaliation for the latter's selling of drone parts to China. Israel quickly stopped those sales. Unfortunately, such coercion seems not to have fared as well against Turkey.

One major critique of the BRI's infrastructure initiatives work to advance the interests and influence of the lead nation, China, by binding smaller states into asymmetric interdependence. However, the JSF Project may do just the same. The JSF is responsible for more than 220,000 direct and indirect jobs in the US, with nearly 1,400 domestic suppliers in forty-five states and Puerto Rico. Meanwhile, while the Australian government claimed the JSF would bring 5,000 jobs and two billion USD in new business to the country by 2023, production jobs are projected to be well below 2,000