Russian President Vladimir Putin doesn’t have many friends in Europe (or elsewhere) at the moment. His annexation of Crimea and aggressive posturing towards Ukraine has been roundly denounced by NATO, the EU, and, as a UN General Assembly resolution condemning the annexation as illegal demonstrated, basically everyone. The U.S. and the EU responded to Russian actions in Crimea with (admittedly limited) sanctions against key Russian government officials and Putin allies. While this is perhaps not particularly newsworthy on the American end, for the EU it is an important step forward – the EU is more vulnerable to Russian retaliatory action given their significantly more prominent economic and political ties. More significantly, on Thursday, the European Parliament called on the EU to prepare economic sanctions in the event that the crisis deepens. This would represent a huge challenge for the now-28 member union to pull off, since the EU and Russia are closely intertwined economically (for example, 19 of 27 EU countries in 2012 had trade deficits with their partner to the east).

That’s not to say that the Russian leader is completely without allies to the west. As a recent Economist article pointed out, the populist far right in Europe has, over the course of the crisis, largely down on his side. These forces include France’s National Front, Italy’s Northern League, the UK’s Independence Party, and the Dutch Freedom Party – political parties with nationalist, anti-EU, and, according to critics, xenophobic platforms, members, and leaders. A few years ago, an alliance between Putin and these groups would have been troubling but not necessarily worthy of much concern. This may not be the case today. 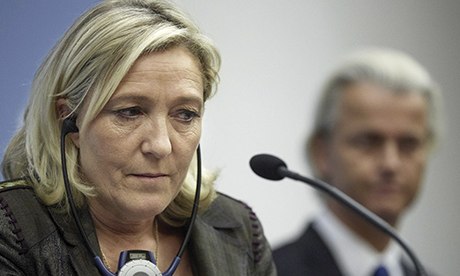 Marine Le Pen
Marine Le Pen’s National Front (Front National en français), for example, has just had a – if not wildly successful – definitely very strong electoral showing in mayoral elections, winning in 11 towns and cities at the end of March.  Running on a platform that leverages popular frustration with the European Union and takes advantage of President François Hollande’s unenviable approval ratings, her party’s success alarmed France’s more mainstream parties (the UMP and the Socialists) and European observers alike. The problem is not so much the rise of the National Front itself as it is the extent to which this success is illustrative of a swing to the political far right across Europe. With continent-wide European Parliament elections coming up in May, the far right is gunning for the EU – Le Pen at the head of the charge. 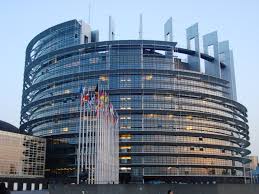 The European Parliament building
What are the implications of this development for the evolution of the Ukraine crisis? Admittedly, few truly consequential effects are foreseeable in the immediate-term. The European Parliament is not the strongest or most important institution in the EU, despite its gradual expansion of powers and responsibilities. Additionally, even if Le Pen’s far-right alliance manages to significantly expand its hold (30% is one figure being tossed around, although that’s likely at the high end of forecasts), mainstream, pro-European parties will retain the majority. But a strong showing by this group will do little to discourage Putin from further escalation, and may very well encourage it. Europe’s far right and the Russian premier share several political stances – skepticism about immigration, strong feelings of nationalism, concerns regarding Islamic extremism, and, perhaps most importantly, a distaste for the EU and its close ties with the U.S. The rise of groups espousing such views does not bode well for transatlantic efforts aimed at more or less containing Putin.

This is illustrated by a few choice examples from recent weeks. The Russian government invited far-right European parties (including the National Front and the Austrian Freedom party) to observe the Crimea referendum – a referendum that the EU had declared invalid. Individual far-right party officials from France and Hungary, doubling as observers, condoned the vote, noting that it appeared to conform to international norms. Marine Le Pen recognized the results.

Leaders of a number of right-wing parties in Europe have expressed explicit support for Putin and his position on Crimea and Ukraine while simultaneously blaming the EU for fomenting the crisis in the first place. Le Pen made waves when she traveled to Moscow earlier this month and used the opportunity to accuse the EU of launching a new Cold War with Russia. In addition, she expressed support for the “federalization” of Ukraine (a proposition rejected by most European governments). Incidentally, she has also expressed opposition to any economic sanctions against Russia. Such actions and rhetoric can only serve to exacerbate the situation and inspire Putin to go further – as would the increased legitimacy that success in the May elections could bring.

This situation must look rather encouraging to Putin as he contemplates his next move. While, as noted earlier, any success the far-right might achieve in May will have little (if any) immediate effect, a strong showing may very well send Putin a political message he’d be only too happy to receive: his friends are on the rise. Such an outcome will also complicate calculations and negotiations within the EU (as well as within individual member states) as leaders attempt to develop and sustain policies opposing the expansionism of the behemoth to the east. The EU may become slower and more hesitant in responding to Russian aggressions, emboldening Putin to take more risks.

Looking ahead, the most significant threat (which is not to say the most likely threat) would be for all of these groups to gain a significant foothold in or even control of their national governments. In 2011, for example, Le Pen stated that if her party won the 2012 presidential election, France would withdraw from NATO and form a special partnership with Russia (keep in mind that France only became a full member of NATO in 2009, when it rejoined the military command). While this is not a position shared by all or even most of Europe’s far-right parties, it would be a severe blow for the Alliance in its efforts to contain Russia. More generally, the rise of any group that seeks to weaken Brussels (which here can mean NATO or the EU), can only serve to strengthen Putin’s position and resolve. However unlikely such events are, they certainly serve as complicating factors in Europe’s efforts to respond to and curtail current and potential Russian aggression.

Posted by pourl'amourdel'otan at 11:56 PM