Who's the bad guy now? 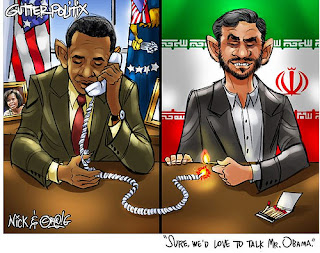 In a recent statement by one of their top government officials, Iran revealed that it would be more transparent with its nuclear program if the West was more cooperative.[1] Mohammad Javad Larijani went so far as to say that Iran would permit permit full transparency and permanent human monitoring of its facilities if it were granted all rights under the Nuclear Non-proliferation Treaty, which includes the right to peacefully use nuclear technology. But isn't refusing access to the IAEA being uncooperative?

Is this just a continuation of silly Iranian government rhetoric, or is the country actually making an effort to seriously work with Western countries and organizations? The latter is definitely possible considering the amount of public consideration that the U.S. and Israel have given to military action against Iran. And with continued sanctions against them, along with a civil war happening in Syria, Iran might finally be realizing that it has not other option but to cooperate with the West. On the other hand, this isn't the first time in recent weeks that Iran has offered an empty promise.

Transparency and cooperation, he cites, are equally parallel  to each other, but they're definitely not mutually exclusive. It will take a little of one to fuel the other, and vice versa. If Iran and the West are committed to cooperating, one side will have to be the first to show a measure of good faith. It's highly unlikely that Iran will be the first to make such a gesture, so how will the West respond to Iran's statements? Considering that "all options are on the table" with Iran, who knows what could happen next.