After two investigations concerning the Salala raid on November 26th last year, the conflict was determined to be attributed to the fog of war and confusion on the battlefield. That day's events resulted in the deaths of 24 Pakistani soldiers. 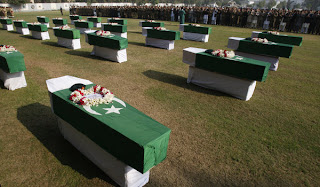 The first investigation was concluded in December. It established that the Pakistani and American forces were both at fault for what occurred. There was a lack of coordination and communication between the militaries involved. The errors in communication and coordination were attributed to the lack of trust from the American side which led to the Pakistani forces not being informed of the location of American troops. Additionally, an operations official under the NATO mission in Afghanistan had been told by Pakistani military officials that the Pakistani border posts were being attacked and it took the NATO official roughly 45 minutes to alert a senior commander.

Meanwhile, there was a detrimental error in mapping which occurred by the American forces. The Americans involved contacted Pakistani forces about the shooting occurring at the border, but they miscalculated their location by approximately 8.5 miles. Therefore, there were informed that Pakistani troops were not stationed at the location. Pakistani border troops fired on the Americans and continued to do so even though they tried to inform them that they were firing on American troops. Overall, the Pakistani leadership rejected the American analysis of the events that transpired and determined that the American troops were culpable for the deaths of the Pakistani soldiers.

This was just the last of a series of events in 2011 which strained U.S.-Pakistani relations. The Salala raid was the final straw for the Pakistani leadership and led to the closing of the NATO supply line. The conclusion of the second investigation about the Salala raid is projected to intensify U.S.-Pakistani relations even more. The goal of the second investigation was to establish if the actions of the American troops warranted punishment. This investigation found that since the soldiers were defending themselves, they would not receive punishment or be charged with any wrong doing.

U.S. military leaders have used the case to focus on the need for better communication and coordination on the border between Pakistan and Afghanistan. However, the incident has made Pakistani officials question the relationship with the United States. The parliament is currently debating the opening of the supply line. While most of the legislators have spoken against allowing arms transportation, there is a division in the parliament in regard to opening the supply line for other goods, like food supplies.

Overall the parliamentary debates highlight the negative relationship that has developed between the U.S. and Pakistan. Legislators voiced their demands not only for an apology by the U.S. government for the events of November 26th, but also for an end to the drone strikes. The United States was criticized for having "double standards" in their policies and actions. Moreover, the parliamentarians were united in their opinion that the Pakistani government needs to refuse to go along with pressure from other nations on both domestic and foreign issues.