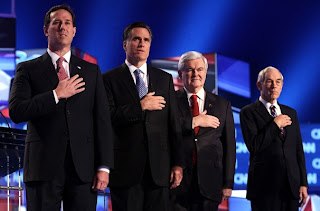 The Florida GOP Debate tonight focused mostly on domestic issues; some issues of national security and foreign policy were touched upon. After months of campaigning and debating, the candidates by and large have not expanded on their foreign policy aspirations. This is primarily due to the economic situation of the United States demanding so much attention. Nevertheless, here is what I gathered in the debate tonight.

Rick Santorum, as he has in previous debates, focused on the current administration's dealings with Latin American countries. He claimed that Obama was not supporting pro-democratic countries like Colombia, and instead was strengthening ties with leftist authoritarian "Marxist" countries, i.e. Cuba and Nicaragua. He also stated that he would not try to establish diplomatic relations with Cuba until after Fidel Castro is gone. Under the current administration, not much attention has been paid to Latin America at all, but the region seems to be an area of expertise for Santorum so he will continue criticizing current U.S.-Latin American relations.

Mitt Romney shifted the focus of foreign policy to the Middle East, where he said Obama had "betrayed" America's ally, Israel. Not sticking with Israel 100%, according to Romney, had led Hamas to take more extreme, violent actions against the Israeli state. Romney made it clear that he supports a two-state solution, but will not waver in his support for Israel. He did not, however, mention the difficulties of creating a Palestinian state, such as the demographics of certain areas and boundaries of a Palestinian state (the possibility of a Palestinian state being surrounded by Israel on all its borders).

Newt Gingrich reiterated a previous statement he made- that the Palestinian nationality is an "invention" of the 1960s. He believes that Palestinians are really just a combination of Egyptians, Lebanese, Syrians, etc. Keep in mind, this was directed at a member of the audience who was a Palestinian-American. He also said that the Israeli state, having been attacked in the fall of last year, should have responded by launching war against Hamas. Of the remaining candidates, Gingrich seems to have the least developed foreign policy ideas. Unless, of course, you include establishing a colony of Americans on the moon.

Ron Paul did not have an opportunity tonight to talk about his foreign policy ideas, but as one might expect, they include an isolationist stance and a refrain from using or deploying U.S. troops abroad.

The domestic issues of the United States (the economy, border control, taxes) are still the center of attention in the political debates. But hopefully if the race between Romney and Gingrich remains close, the two will be forced to expand upon their foreign policy ideas in more detail.
Posted by Iran (so far away) at 2:06 AM