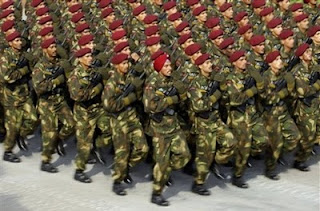 In order to ensure higher security in Asia, India and the United States are seeking to build a more strategic relationship through discussions about missile defense systems. Last week, in an attempt to help India deter nuclear threats, the American Deputy Assistant Secretary of Defense for South and Southeast Asia stated that they were willing to examine the sale or joint production of missile shield systems with India. American officials have met with Indian missile experts, and participated in both actual and computerized missile simulations. The U.S. was hoping that India would purchase the Patriot Advanced Capability(PAC)-3 missile defense system, the most advanced air defense missile, but India has shown an interest in building its own systems. This obviously produces contention from Pakistan and China, since these discussions display the shared strategic interests between the United States and India and encourage giving India further technology that would enable them to better defend themselves against Pakistani and Chinese missiles. There’s also the added risk of Indian officials deciding to forego American equipment and build their missile defense system indigenously, thus lessening the amount of transparency and accountability.

Conversation on such things between the two countries is nothing new, since the two countries began discussion about ballistic missile defense shields three years ago. However, the discussions are of particular interest since India is in the midst of a substantial military modernization program and was named the world’s largest weapons importer by the arms watchdog SIPRI. The plans to continue the dialogue are also of particular importance since Pentagon officials have named China as a threat and seek to keep their relationship with India particularly strong as Asia gains increased global power.