Sec. Gates Denies Use of Most Advanced Military Radar 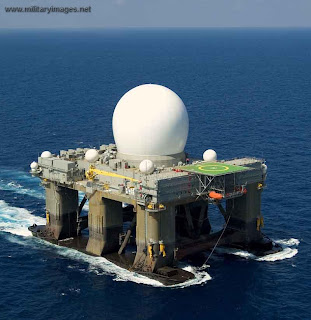 The $900 million SBX radar system.  It was on R&R while North Korea conducted its latest missile launch.  Why?
The Washington Times reported yesterday that Secretary of Defense Gates denied NORTHCOM's request to use the military's most advanced radar system to monitor and collect detailed data about the Tapedong-2 missile recently launched by North Korea.  Why wouldn't the US use this system which "is clearly without a doubt the most powerful and capable sensor in all of our missile defense inventory" to gather data about the North Korean missile launch?  Several possibilities exists.
Before the possibilities can be explored, a little detail about the SBX (Sea-based X-band Radar) is warranted.  It is widely rumored that the SBX is so powerful that it could be stationed in a harbor in New York and track a home run hit out of a ballpark in San Francisco.  The military has acknowledged that the SBX's abilities were used to track and shoot down a rogue spy satellite in 2008.  The SBX was launched in 2005 and is typically stationed in Adak Island, Alaska, although it has recently been in Hawaii for repairs.  And of course, the SBX looks like a golf ball teed up on a giant driving range.  I personally think that the SBX looks cool enough to make even Dr. Evil proud - not quite a laser beam on the moon, but pretty close.
So if the SBX is so powerful and could provide finely detailed data on North Korea's missile launch, why didn't Sec. Gates approve its use?
1) Some have argued that the SBX wasn't used because it was undergoing repairs.  Unlikely - I highly doubt that the US military would have allowed its most powerful radar system to be getting its oil changed when it was needed most.
2) Others have said that it wasn't used because we were afraid of provoking North Korea.  Ridiculous - This theory fails for two reasons.  First, how would the North Koreans even know the SBX was in use when it could sit on our side of the Pacific and do its job?  Second, what would the additional "provocation" of North Korea look like?  Remember, they were already launching an ICBM for crying out loud.
My personal opinion is that the SBX wasn't used because the US knew the missile would fail.  There is no other explanation.  If the US truly thought the missile posed a threat or could reach Hawaii (as had been reported) then all of our missile defense capabilities (of which the SBX is the backbone) would have been at the ready.
Assuming we knew the missile would fail leads to one final conclusion - the US was able to manipulate and bring about the missile's demise.  This could have taken place by covertly providing faulty missile components or having a HUMINT source on the ground sabotage the launch.  Either way, the only reason not to use your best tools is because you know they don't need to be used.  The missile launch was doomed before it left the ground and that is why the SBX wasn't deployed.
Posted by David Riley at 12:08 PM

NEWPORT, Rhode Island -- Yesterday, the Washington Times reported that Defense Secretary had nixed the use of one of the military's most advanced radar systems to monitor North Korea's recent missile launch - preventing "officials from collecting finely detailed launch data." Today, Robert Gates took issue with the report. "It really ticked me off," he told reporters at an informal gathering. The article implied that Gates kept the radar back, to keep from "provoking the North Korean." Gates responded that it was really just a matter of money.

Gates said his military advisors -- including Chairman of the Joint Chiefs of Staff Admiral Michael Mullen and Vice Chairman General James Cartwright -- had advised against using the Sea-Based X-Band Radar (SBX). The $900 million system has a powerful tracking and discrimination radar that can pinpoint tiny objects thousands of miles away. But the SBX -- sometimes referred to as the "giant golf ball" because of its bulbous, ten-story high radome -- is also notoriously fragile. In the weeks leading up to the North Korean launch, the SBX was undergoing repairs. Hauling it up to Alaska, to track Pyongyang's missile, would have cost "50 to 100 million dollars," according to Gates. That didn't seem worth the cash, he added, when "all the intelligence -- all the intelligence -- said it was a satellite launch."

I'm not convinced that it was just a money issue. I will, however, entertain the idea for a brief moment. If the SBX wasn't used because the military is saving money, then the culture of DoD has drastically changed in a few brief weeks.

We've already seen Gates cut out future combat systems and funding for unproven military equipment. I personally think this is great. Let's put our money to more practical uses which will show results.

BUT, if the SBX wasn't used because of money, then Gates has begun cutting program funding for PROVEN technologies already in existence, and I find that disturbing. We've already spent more than $1 billion on the SBX program and it is fully operational and proven (it helped shoot down that satellite last year). If Gates didn't use the SBX because of money, I find this a serious lapse in judgment.

Or maybe he just really didn't think it was necessary.