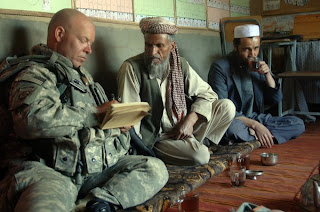 In other news, you can expect water to still be wet and the sky remains blue. But in all seriousness (and despite this being fairly old news) the Human Terrain System (HTS) has experienced a loss of about 33% of its employees following an announcement that all team members would be converted from contractor status to government employees.
For those unfamiliar with the HTS program, it is a program that has brought social scientists and linguists to Iraq and Afghanistan to provide cultural and sociological insight to military leaders and decision makers. The idea is that by providing a more complete and accurate picture of the human geography in the regions in which it is currently engaged, the U.S. can make better decisions for both the people there as well as U.S. interests. The program has admirable goals but has had more than its fair share of bad press. This includes team member Don Ayala pleading guilty to manslaughter for killing a man who had killed his colleague, Paula Loyd. Another contractor has been indicted on charges of spying for Saddam. Bottom line is that the program has had some fairly major "hiccups".
The program itself should not be written off as a failure though. Between Mr. Hopey-Changey calling for more intelligent solutions and Bob Gates advocating for solutions that are not entirely based upon the military, this program seems to be along the lines of precisely what the U.S. needs to support. And Obama has said that he plans to expand this program. The problem is that the program has been crippled as a result of the aformentioned cuts to pay as contractors are converted to government employees. We are asking academics to put themselves into harm's way while simultaneously removing the only real material incentive for doing so. And as a result we see a wave of resignations from the HTS program. For this program to succeed, the U.S. needs to be able to draw top academics and regional experts into the ranks and this may mean an increase in funding during a time when everything seems to be facing cuts. It may seem unreasonable to some for the HTS members to earn $200,000+ but you get what you pay for and it is more unreasonable to expect the type of academic that the program would most benefit from to leave the safety of their positions for a third of that amount. The HTS has a chance to do some real good in Iraq and Afghanistan but cannot achieve its potenatial if it cannot lure the experts that it needs.
Posted by Fork at 1:47 PM

The problem isn't (entirely) the cut in pay; its the way HTS management went about it. Also, IMO, the main source for success isn't necessarily the social scientists involved in the program, its the human terrain analysts. And with the cut in pay HTAs go from making good money to making less than CAT 1 terps who never leave FOBs. That change in pay is going to drive away the best HTAs and is the truly crippling aspect of the change.