Betting it all on Russia 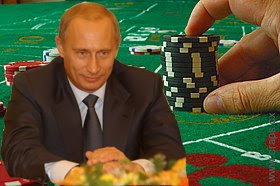 According to an article on GlobalSecurity.org, the United Nations will consider supporting a uranium bank that would be located in Russia. The bank would provide an alternative to uranium enrichment for countries, such as Iran, who build civilian nuclear power programs. Uranium enrichment is a required step for the production of weapons-grade uranium, which could be used in nuclear weapons. According to the proposed plan, the bank would be administered by the International Atomic Energy Agency.

The creation of such a bank is widely seen as a positive step toward securing reactor-grade and spent uranium. This would allow countries to pursue peaceful nuclear power without increasing the amount of poorly-secured nuclear material. It is a step recommended by Colonel William Hauser and Lt. General Robert Gard in their speech at the Patterson School on April 9, 2009. The bank will prevent terrorists and rogue states from getting their hands on nuclear material.

However, is Russia really the best place for a uranium bank? It offers a few advantages. So far, the Russians seem very willing to host the bank, since it will allow them to sell uranium to countries who currently have a peaceful nuclear power program or who develop one in the future. Russia also offers the advantage of being geographically close to uranium deposits in Siberia, Kazakhstan, Ukraine and Uzbekistan.

But set aside, for a moment, the advantages that such a uranium bank would provide in the realm of nuclear non-proliferation, and consider the matter of energy security. Allowing this bank to be hosted by Russia means that many countries would be dependent on Russia for their energy needs. This hasn’t worked out so well in the past with regard to natural gas pipelines. Russia has, at times, held Eastern Europe hostage by cutting off the flow of gas in the winter. If Russia becomes the main source of nuclear fuel for dozens of countries, what’s to stop it from using the same tactics to extract rents that it uses in other energy sectors?

The uranium bank is a positive step toward securing nuclear materials and encouraging the peaceful use of nuclear power, but allowing Russia to host the bank is too large a gamble.
Posted by Thomas Paine at 12:04 PM