Counterinsurgency is the set of political, economic, social, military, legal and psychological activities, institutional and non-institutional, necessary to neutralize an insurgency (ideologically motivated to provoke  a political change of a country) and respond to the main reasons for frustration of the population. More technically, counterinsurgency is a “comprehensive civilian and military efforts designed to simultaneously defeat and contain insurgency and address its root causes”. It is a military doctrine aimed at gaining the support of the population in a conflict between an insurgent movement and a government. This doctrine is based on civilian -military actions, intelligence activities, and psychological warfare. Counterinsurgency has long been associated with the excessive use of force and torture. Counterinsurgency has many principles.
The principles of counterinsurgency apply in the context of a civil war or military occupation to combat an insurrection. This military theory brings together a set of tactics mainly used by ground forces and supported by surveillance (reconnaissance and intelligence) and air strikes.  David Petraeus, a former CIA Director, defines counterinsurgency as "win hearts and minds" in the Counter Insurgency Field Manual FM 3-24 as follows: "win hearts means persuading people that their best interests are protected by defeating the insurgents. Experts argue that this method is “Population-centric Counterinsurgency”. Gian Gentile, in his article, Population Centric COIN and the Army“ defines this term as “a military operation, a method, nothing more and nothing less”.

Intelligence thus plays a crucial role because it allows undermining the support of population to the insurgents with the aim of dismantling the active or sleeping cells. Counterinsurgency is then based on simple principles including segregating local population from the insurgents, occupying areas where insurgents previously held, and  coordinating  the  actions over a wide geographical area and over a long period so that the insurgents  will no longer have access to the population that support them. 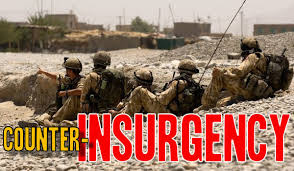 Counterinsurgency has been for a long period of time carried out within a country’s borders because of the sovereignty issue. Today, it goes beyond and imposes itself within the framework of the external operations. This new characteristic of contemporary conflict, particularly witnessed in Iraq and Afghanistan, has provided an opportunity to redefine the contexts of counterinsurgency implementation.

Counterinsurgency Factors and Operational Environment
There are many forms of insurgency. Extreme violence is one form that often justifies the intervention of external military forces. In Afghanistan for example, counterinsurgency intervention was (is) carried out within a framework of stabilization and reconstruction process aimed at restoring political, security, and social conditions. To counter the insurgency whose main tactics include violence, kidnapping, beheading, bombings, and subversion, the emphasis is put on security strategy in order to end the insurgent’s propaganda.
Besides all tactics used to combat an insurgency,  the reconstruction process should also be taken into account. It consists of stability, namely governance, economic, and social development. It remains essential in the fight against insurgency. Actions tend to de-legitimize and deprive insurgents of their popular support. In the majority of cases, insurgencies grow in a degraded political and social environment marked by a lack of governance and economic and social development.