With the American shift towards the Pacific region, much focus has been placed on the perceived containment strategy against China, implemented by Washington, through mutual defense agreements and economic partnerships such as Trans-Pacific Partnership. At the same time, Beijing has been forcefully pushing territorial claims in the South China Sea, creating an atmosphere of worry and fear among its weaker neighbors. With outrageous claims such as the 9 dash line, which completely ignore previously agreed upon norms such as the UNCLOS, tension between China and neighboring countries has simmered, at some points boiling over in near armed conflict.
Vietnam, long thought of as a beneficiary country of the Chinese or one that is more ideologically similar, has been one of the nations to bear the brunt of these overreaching claims in the South China Sea.  When looking at the relations between the two historically, both parties have been known to clash. In 1979, the Chinese military entered northern Vietnam as a response to the Vietnamese invasion and occupation of Cambodia. In 1988, there was a brief naval conflict between the two nations over the long held issue of territorial claims in the South China Sea, the Johnson South Reef Skirmish, where both nations sent naval vessels to consolidate their claims over the Spratly Islands, where more than 60 Vietnamese soldiers were killed by Chinese forces.
Why is it then that the nations in the region are so insistent on their claims in areas where there are few landmasses, but rather open seas? In the near future, when resources become scarcer, nations will be forced to compete more with one another. According to the United States Energy Information Administration, the South China Sea is thought to have more than 11 billion barrels of oil. The Administration continues to state, “The South China Sea is a critical world trade route and a potential source of hydrocarbons, particularly natural gas, with competing claims of ownership over the sea and its resources.”(USEIA) In the attached graphic, one can see the amount of explorative measures that oil companies have already taken part in off the coast of Vietnam and why both nations are key to gain sovereignty over the area. 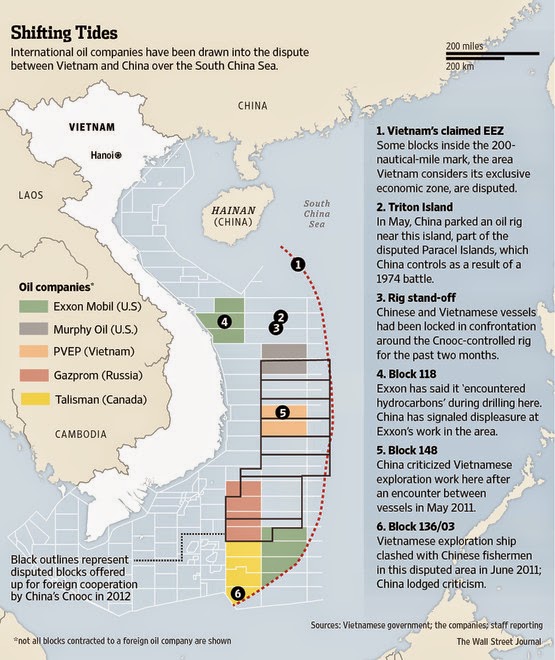 There exists several options for Vietnam, a much smaller country in terms of population and economic power, to be able to counter such an overwhelming power such as China. The first option would be an approach in relations with China in the hopes that siding with the major power in the region would bring a possible compromise in terms territory gained or lost. However, after looking at the large amount of territory China has claimed and the aggressive measures taken to consolidate these claims, (see Senkaku Islands), this choice would be limited in benefits.
The other major option for Vietnam is to seek a power balancing mechanism, As seen in ASEAN. While alone, the countries in this group may be limited in their success when dealing with the Chinese, if they are able to show a unified position and increase their bargaining power through a larger overall military and economic power. Vietnam also has begun to increase defense cooperation with the United States, leaving open the possibility of increased cooperation as a deterrent towards China.
The second option seems to be the most plausible for the Vietnamese government. There is no guarantee that cooperation with Beijing would lead to concessions on the Chinese side. The Chinese behavior towards other countries in the region regarding the same territorial claims highlights the fact that a mutual agreement is highly unlikely. The best way to deter Chinese aggression towards Vietnam is to increase the cost of such aggression through power balancing, thus furthering the damage that China may face economically and militarily if it were to attempt to force its will upon its neighbors.