From Science Fiction to Science Fact: the Exosuit Solider

From the book Starship Troopers to movies like Aliens and Edge of Tomorrow, the powered exoskeleton has been a staple of military science fiction. As Lawrence Freedman’s The Future of War suggests, these works of fiction have captured the imagination of many. Undoubtedly parallels of Robert Downey Jr., Sigourney Weaver, or Tom Cruise and Emily Blunt battling bloodthirsty aliens in exo-suits are made at every new exoskeleton prototype showcase.

While the technology is yet to enable superhuman feats, the US Army has been exploring the use of exoskeleton technologies to allow warfighters to run faster, lift heavier objects, and relieve physical strain. The Army’s Soldier Center designated 6.9 million USD toward a 48-month long Other Transaction Agreement (OTA) to develop enough exoskeleton systems to conduct a comprehensive operational evaluation. So far, the Soldier Center has only selected Lockheed Martin’s ONYX and Dephy’s ExoBoot. 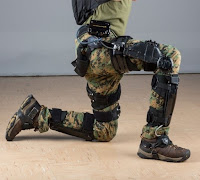 The LockheedMartin’s ONYX has sensors distributed on the exoskeleton report speed, direction, and angle of movement to an on-board computer that drives electro-mechanical actuators at the knees. Ideally, the ONYX delivers the right torque at the right time to assist knee flexion and extension. Ultimately, the ONYX reduces the energy needed to cross terrain, squat, or kneel. A soldier utilizing the ONYX enhances their strengthen and endurance to carry loads or use heavy weapons. Additionally, the ONYX should reduce fatigue and the stress on leg muscles.  The ExoBoot focuses on the lower leg below the knee, aligning the joint areas of the human musculoskeletal system with a mechanical structure rigid enough to transfer significant force to the ground and yet not compromise the user’s natural range of motion.

While the ONYX and ExoBoot exoskeletons would undoubtedly benefit a soldier’s effectiveness, these are far from a revolutionary technology seen in movies and video games. However, the Army Solider Center is not alone in its interest in exoskeletons. The US Special Operations Command (USSOCOM) rewarded Sarcos Robotics with a contract to deliver a full-body robotic exoskeleton called the “Guardian XO.” The Guardian XO gives the wearers “the strength of a forklift but a gentler touch” and is powered by an on-board battery that can operate for up to eight hours. Though still far from the kind of exosuits Tom Cruise and Emily Blunt had in Edge of Tomorrow, a functional full-body exosuit could be revolutionary. A single soldier with the same firepower and speed of a tank while maintaining maneuverability might become a reality in the coming decades