Women in the Military 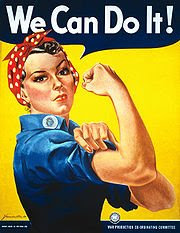 I have always wondered about the experiences of women in the military. As a society we see the stereotypical GI Jane in Hollywood flicks; women who are so tough they will shave their heads before they give into the sexual harassment and degrading treatment from superiors and peers. Knowing this experience is not completely true for all women in the military, I wondered what is the typical female military experience?

Recently, Maj. Gen. Mary Ann Krusa-Dossin was elevated to the highest rank achieved by a female Marine. Krusa-Dossin, 56, acknowledged the trials of women in the forces: separate training, discrimination based in attitudes that women cannot lead (especially men) and that they were not as brave or capable as their male counterparts. Despite these attitudes, Krusa-Dossin showed the Marines what a woman in the military could do. She climbed the ladder, and had children.

Most importantly, Krusa-Dossin serves as a real life example of a woman in the military. She did not shave her head to be accepted; instead she showed the men in her company that being a woman is not a frailty. Just the opposite, she says that women bring compassion and emotion to the table, which inform decisions in positive ways. "Women have proven their courage time and time again in Iraq and Afghanistan," she said. "Courage and bravery is not defined by gender."

Women like Krusa-Dossin, like many women before her, have blazed the trail for today’s young women in the military branches. Recent studies say that women are enlisting in record numbers. However, the increased numbers do not necessarily reflect that the women are being wholly welcomed.

A Pentagon task force in 2005 found that inappropriate treatment of women - including offensive comments, repeated and unwelcome propositions and offers to trade academic favors for sexual acts - persisted at West Point and the Naval Academy. (article from military.com)

As Krusa-Dossin celebrates her promotion and all the symbolism it entails for women in the armed forces, it will be up to this generation to hammer home the part about equality and appropriate treatment of colleagues.
Posted by Goose at 3:24 PM