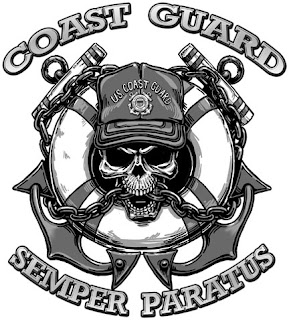 According to this article, not the U.S. Navy or Marines deal with pirate boats, but the U.S. Coast Guard. The reason is that piracy is of course an international crime and is being dealt with not as a military problem, but using law enforcement capabilities through the Coast Guard. After Coast Guard and Navy personnel have collected the evidence against suspected pirates, they plan to prosecute them using the Kenyan legal system.
The USS Boxer is currently one of the main U.S. Navy ships patrolling the Gulf of Aden. It is an amphibious assault ship of 844 feet length. It carries between 2,500 and 3,000 crew members and three 20mm rapid fire guns, four 50 cal machine guns, four 25mm machine guns and numerous missiles. On board are up to 12 CH-46 Sea Knight helicopters, four CH-53 Sea Stallions, three UH-1 Hueys and four AH-1W Super Cobras. Up to six AV-8B Harriers are also on board.
When the Navy spots suspected pirate ships, small speed boats race out in front of the assault ship and chase the pirate vessel down. If the pirates are intercepted, they "invariably surrender" according to the Navy. Combined Task Force 151 is a joint operation of the U.S., Danish and Turkish navies with the objective of actively hunting down pirates. While the EU has its own task force in the Gulf of Aden, its mission is solely to protect humanitarian aid shipments. Russia and China have vessels patrolling the area to escort their own commercial ships.
Other CTF 151 ships in the Gulf are the Turkish frigate TCG Giresun, the Danish frigate/support ship HDMS Absalon and the U.S. cruiser USS Gettysburg. And who knew were was such a thing as a pirate standard operating procedure (a.k.a. how to be a pirate):
1. pirates launch near Somalia's northern coast using groups of 2-3 boats and GPS navigation systems;
2. pirates overnight off the coast of Yemen, turn off engines to conserve fuel;
3. in the morning, pirates attack any vulnerable boat within reach with AK-47s, ladders and grappling hooks;
4. pirates steer ship to Somali coastal cities and hand it to other pirates
And there is a "pirate code" of good conduct: your pay is cut if you harm the ship or crew unnecessarily. It is a business after all.
Posted by Thomas Hobbes at 6:08 PM