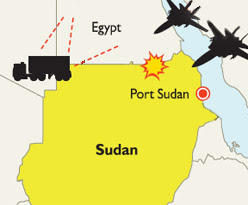 This story has taken some interesting turns, and it seems that Sudan would really like to stick Israel or the U.S. for violating the eastern Sudan, which from what I know about western Sudan, must be the beach volleyball playing resort part of the country (well, not really)

Unfortunately for the war-Criminalizing Sudanese government, when they aren't facilitating the destruction of their own citizens, they apparently were not rehearsing how to win a battle of ideas. In a great piece of journalism, a member of Hamas tried to separate himself from Sudan, and was reluctant to jump to conclusions at all, to wit:

"First of all we are not sure any convoy has been hit, but it is ironic to link these convoys to Hamas," one of the movement's leaders, Salah al-Bardawil, told AFP.

"Should it turn out that there were raids and a high number of people killed, this would mean Israel is seeking to use the opportunity to blame Hamas and hit Sudan," he said.

However, all is not lost for making Israel look evil,and though the Israelis apparently is learning that ideas are stronger than bombs, it is not exhibited by the next statement in the article-

"We operate in many places near and far, and carry out strikes in a manner that strengthens our deterrence," Israel's outgoing Prime Minister Ehud Olmert said after reports of the bombing raids emerged. "We operate anywhere we can target terror infrastructure. There is no point in going into details, anyone can use his imagination."

Using my imagination, I smiled deeply when I read about how Israel was still wanting some stealth F-22s. Even though they can already hit a country, and no one would be sure it even happened months later, the sad aircraft manufacturers would be happy for the business.

In fact, we should just go ahead and sell as much of these planes to whoever would be willing to bomb smugglers in the dark.