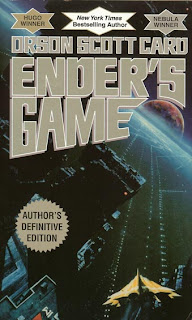 This is for those of you who used the snow days to get so far ahead in readings for class that now you are desperate for any sort of entertainment; instead of diving into Battlestar Gallactica, I would like to suggest a far sweeter melding of defensive policy, science fiction, and alien fightin'- Ender's Game.

Even though bookstores and libraries put this in the juvenile fiction category (a fact I attribute to the young protagonist factor) this book is assigned as required reading by numerous military educational institutions; for crying out loud, Orson Scott Card predicts blogging as an important driver of public sentiment, which should encourage us all.

The story centers around Ender Wiggin, chosen by a Big-brother global government to train in a battle school, in preparation to fight against the wretched buggers, who have already attacked earth and left it in such dire straits that there is no longer the option of negotiation or compromise. Ender has the gentetic composition to be the greatest general ever, and he proves himself worthy and earns the right to be trained, manipulated, and coerced into an imaginative and thinking tool of the humans against their enemy.

What is so interesting about this exploitation of kids in the military for the benefit of long decided policy (Ender is being trained to command a fleet of warships which have been speeding toward their goal for years at top speed; there is no option for him to stop, he is only a herder who can most efficiently direct the human fleet against the aliens) is not only Ender's position as a slave to his superiors, but the freedom which his siblings enjoy.

Although Ender is the smartest, his brother and sister enjoy a vast intellectual advantage, what we today might call "mad smarts," which translated weirdly into leadership in the civilian realm; they decide to submit opinion pieces under fake names (named after philosophers John Locke and Demosthones) and for fun (for fun!) they pull world opinion back and forth, each showing how a few savvy words can change the fate of an entire race of sentinent beings.

The only downside of Ender's game is the unrealistically young age of the protagonists; the same feeling we felt after watching Rugrats for a few seasons, and then realising "I'll never be as cool as Tommy Pickles," only to turn to Hey Arnold!, and reach the same conclusion ( hey mom, where is my unversal remote/unfolding couch?) six years later. If you can handle reading about a kid half (or one third) your age who might make Napoleon feel like an underachiever, check it out.
Posted by locke at 9:34 PM