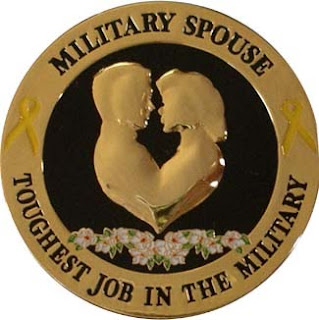 Though it is after the final, I wanted to take the opportunity to recognize our military spouses on "Military Spouse Appreciation Day!"  Though each of the different branches of service have varying tempos of PCSing (Permanent Change of Station - AKA "Moving"), and varying degrees of danger in each MOS, military spouses endure much when the motto is "Quarters Sweet Quarters" or "Home is Where the Army/Marine Corps/Navy/Air Force Sends Me."  Moreover, they endure extended times away from their significant others, including week and month long training exercises before year-long deployments.  Meanwhile, they stay strong for the children, each other, and their serving member in order to allow him/her to stay committed to the mission.  Anyone who has seen "We Were Soldiers" can scoff at some of the melodrama, but when they understand the role that then LTC Moore's wife endured for her husband, her unit, and her country, her strength and that of her fellow spouses is truly remarkable!

The role of the military spouse is critical in our Defense Statecraft.  Our willingness to support our military families has a direct impact on the espirit de corps of our troops, and influences significantly what they are cabaple of producing.  In an environment where we ask units to immediately get in the rotation for a deployment after they have just returned, the strain on the trooper and his/her family can break the back of our military projection capability.  We ask a lot of our spouses while the troops are gone and they have continually delivered!

God Bless all of our Military Spouses on a day that they truly deserve!
Posted by Marshal Davout at 12:54 PM