Diabetes is no Laughing Matter 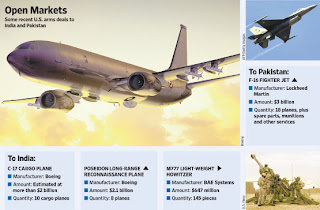 The United States is parceling out its services in strange ways selling arms to both India and Pakistan. The U.S. claims neutrality in the conflict between the nuclear neighbors possibly enabling a defense of equal opportunity arms distribution. The Washington Post reports that to Pakistan, the U.S. is selling 18 F-16 fighter jets at a cost of $3 billion; to India 10 C-17 cargo planes, 8 Poseidon Long-Range Reconnaissance Planes, and 145 M777 Light-Weight Howitzers all totaled at $4.7 billion.
The trade deal predictably provoked protests from both countries, India going so far as to enact a legislative appeal to halt the transaction with Pakistan. This hardly registered with the DOD who is facilitating the deals. While India pays out of pocket for these arms, Pakistan is using U.S. approved grants which they receive as aid to finance the F-16's. It's supposed that most of the aid which the U.S. doubles to Pakistan next year will arrive back in U.S. hands in the form of defense contracts.
Besides making money, the United States appears to be attempting to deter conventional warfare between the countries by helping to beef up their defenses making any kind of aggression seem more costly. You might hardly be able to tell though when the U.S. is supporting two of its companies, Lockheed and Boeing, in bid for a $10 billion, 145 fighter jet contract to India. The U.S. is looking to supplant Russia, who is in bid for the contract, as the main arms supplier to India (India's 1000+ piece air force is almost completely Russian). In facilitating closer ties to India the U.S. hopes to create a buffer ally against the growing Chinese military. While deepening economic ties between China, India, and the U.S. will looks to stabilize regional relationships, the mess of military cooperation, defense contracts (to India and Taiwan), and conflict history (between India and China in the 60's) will ensure results akin to the infinite improbability drive.
Posted by LtDansLegs at 3:21 PM