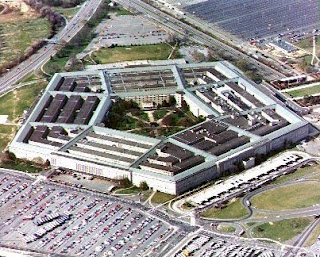 A draft of the 2010 Quadrennial Defense Review is out in the wild, and it hold some interesting changes from the 2006 QDR.

The new QDR modifies the "We can fight two wars at once" concept previously central to U.S. military spending, cuts some programs and moves away from a enemy-centric focus to the goal of countering threatening capabilities.

No, there's no catchy way to put that, even in the acronym happy Department of Defense.

Or, as a Pentagon official told the Washington Independent, as reported by Spencer Ackerman (Attackerman):

“We’ll take some hits for not having a bumper-sticker force planning construct, but screw it,” the Pentagon official said. “The world is complicated.”

Programs to be cut include the Navy's CG(X) cruiser and further purchases of the Air Force's C-17 transport aircraft. It also includes a delay of the Navy's LCC command ship roll-out. Ackerman quotes a DoD official who says the Pentagon cuts of last year allowed the QDR to shift spending priorities instead of adding many more program cuts.

The Navy was anticipating the loss of perhaps two carrier battle groups, but the draft doesn't contain such cuts. It does call for a move of forces from the Atlantic to the Pacific (pleasing those in Hawaii and Guam), an "alternative port" on the East Coast for a carrier (although it doesn't mention where) and more DDG-51 destroyers with the Aegis package as part of the call for ballistic missile defense around Europe.

The Air Force is eying continued endorsement of unmanned aircraft and long-range strike capability, as well as an emphasis on sensors "over older manned fighters and large-bus space assets," according to Aviation Week.

In another interesting move, the 2010 QDR will likely address the need to "green" the military. The 2006 QDR barely address the issue, says Wired Magazine's Danger Room blog.

Among other things, the draft QDR suggests the military will have to start planning for operations in which rising sea levels, an ice-free Arctic and higher overall global temperatures may be an important factor. What’s more, it suggests that military planners will have to prepared for the knock-on effects of climate change: forced migration, resource scarcity and the spread of disease.

Ackerman also sees the leaked QDR as a preview of the Obama's National Security Strategy.

Note that there is still a possibility of surprises in the final QDR release on Mon., Feb. 2. In some ways, this QDR is surprising in what it doesn't cut. Or as one think tanker says:

"You have to wonder whether the tough year is ever going to come," said Loren Thompson, chief operating officer of the Lexington Institute, a defense think tank.

Regardless, this QDR appears to be the Pentagon setting its house in order and changing how it thinks, particularly compared to the 2006 QDR.
Posted by Mackinder at 2:10 PM