Israel and the USA: a love story on the rocks

Obama, Netanyahu and the future of the Two State Solution

Right now, things between Israel and her perpetual ally, the United States, are a bit chilly. Obama, who is going to Jerusalem this week, knows full well that Israelis do not regard him as a friendly president. Personal relations between President Obama and recently re-elected Israeli Prime Minister, Netanyahu, are decidedly frigid. They have been for the past four years. Netanyahu openly preferred Obama's opponent (Mitt Romney, in case you've already forgotten) during the last election. 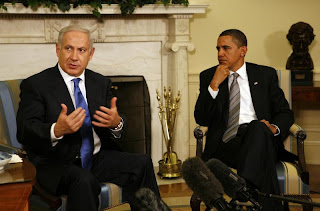 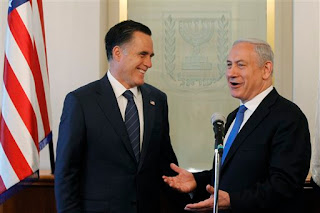 Romney and Netanyahu enjoying each other's company excessively in October 2012.

Needless to say, there's not exactly any lost love between Barack Obama and Benjamin Netanyahu and that'll make the task before Obama only that much more difficult. The task being pushing for that two-state solution, the death of which more and more people are constantly bemoaning.

According to a lot of people (the Economist) that's a dream Barack Obama should fight to keep alive.

The United Nations, the White House, and most influential actors around the world believe that "any solution ending that strife [between Israel and Palestinians], must be based on two separate states:" a mainly Jewish one, Israel; and a mainly Arab one, Palestine. In this vision, the border between the two states should be based on the border that existed before the 1967 ("Six Day") war. This border is known as the "green line." Of course some adjustments and land swaps should be made to reflect the current situation. Jerusalem itself would be a shared, but divided capital.

That's one vision--which, of course, is not without its flaws, but is perhaps more palatable, and more likely, than other visions for the future of the region floating out in the ether.

Blame for the failure during Obama's first administration to advance the cause of peace between Israelis and Palestinians falls upon both parties. Obama and Netanyahu shared "gross mistakes" in efforts to further the cause. Obama failed to persuade the Israelis of their need to strike a deal with the Palestinians, Netanyahu went behind the president's back to Congress and persisted in expanding Jewish settlements on Palestinian land. Talks, naturally, have stagnated; further negotiations seem unlikely as "the Palestinians are as inept as the Israelis are unyielding."  It falls, therefore, to Barack Obama (scheduled to arrive in Israel on 20 March) and new Secretary of State John Kerry to detail a peace plan on their own.

Obama's mission in the upcoming trip to the Israelis, the Economist argues, is to "convince Mr Netanyahu and ordinary Israelis that he believes making peace is in their interest and he is determined to get involved." This, of course, means making it clear that a two state solution is simply the only solution. This will be a hard sell; presently the cause is in tatters--the one state solution is gaining supporters of, impossibly, both supremacists and romantics--those idealists who dream, starry-eyed, of Arabs and Jews coexisting peacefully in a bi-national state. It's a good dream, but not a plausible one--at least not at this point. Of course, the one state solution is also supported by the presence of Jewish settlements on the West Bank who have become so great in numbers that they make "a contiguous, viable Palestine hard to construct."

The Economist argues that a one-state solution could end in tragedy for the interests of Israel. The Economist briefing this week: "The Middle East peace process: Could two become one?", argues that the one-state option is a dangerous distraction, for Israel in particular.  Palestinians are out-breeding the Jewish Israelis, and if they were confronted by a single state where Palestinians have a voting majority, may find things going south for them very, very quickly.  They'd eventually face a harsh decision: "give up the idea of a Jewish state or deprive Palestinians of their rights as citizens." Apartheid Israel?  Furthermore, Israeli prospects would turn ugly before that decision manifested. With the rest of the Arab world embracing democracy (sort of) Israel could not afford to continue suppressing "millions of surly Palestinians" under occupation--certainly not "without risking both international anger and another Palestinian uprising" which no one wants, really.

Obviously, this would best be avoided entirely, bringing us directly back to the two state solution and what the Economist, at least, regards as Obama's responsibility to it.  Obama, and the United States, wants a two state solution as much as anyone; it remains a core national security interest to the US.  Obama's venture to Israel on March 20th will mark the first visit to the country since he's taken office.  Making Israel a stop on his first overseas trip during his second term, shows Obama's intention to demonstrate support to Israel--support that will be publicly reaffirmed this week. He will profess his love for the Jewish state, he will reaffirm the unbreakable bond between the US and Israel, he will reassure Israelis that he will stop Iran from acquiring a nuclear weapon.  Netanyahu will make responding overtures, and they will try to "move past the friction of the last few years now that both have won re-election." Maybe the frost between the  two leaders will thaw now that their political futures are more secure; maybe they will feel greater freedom to act belligerently towards the other. As the Economist pointed out: "America's support for Israel in international organisations such as the UN will not be infinite. This president is not running again. If Mr Netanyahu tries to outflank [Obama] in Congress, he can expect a fight."

Returning to peace talks will be difficult. Israel is busy with fiscal concerns (including the need for budget cuts) and this may preoccupy the government in the short-to-mid term. The formation of the new coalition places endorsement of the two state option in political limbo, at least for now. Some worry that a "surge" in settlement building is on the horizon, which will, naturally, push hope for talks firmly in the opposite direction.

There is the question of whether talks should continue at the present time at all. Both parties are exceedingly frustrated with the other and it seems unlikely that any ground will be made. Also, considering Palestinian frustration at their own government's failure, "it's possible that the Palestinian Authority could not survive another round of failed negotiations." Regardless, many feel that the United States could do a lot behind the scenes to push the process along in the absence of formal talks. These activities include working with Israel on issues regarding the possible cessation of settlement construction and Palestinian prisoners held in Israeli prisons---pursuit of these issues would bolster the Palestinian Authority's credibility. The Palestine Authority, for its part, should use "every opportunity" to express their desire to commit to a two state solution. President Mahmoud Abbas's speech at the 2012  UN General Assembly was regarded by Israelis as inflammatory--it wasn't exactly helpful in advancing the process.

Nevertheless, Palestine and the Palestinian Authority cannot sustain indefinitely in the limbo of the current status quo. In turn, neither can Israel itself. The United States should work with both parties in order to guarantee the eventual return to negotiation, when appropriate, in order to continue towards the final goal: end of occupation and conflict in the region. The United States, as Obama should remind his hosts this week, is vital to guaranteeing the success of this process.

o my god,i satisfied & impress to your collection & information.

sir i want to search JSSC Syllabus please made a page of JSSC Syllabus 2017 for those candidates who are going to appear in JSSC CGSCE Preliminary and Mains Exams.

Job hunters who are looking for jobs in Government Sector must visit RecruitmentInboxx.com. Here we have provided you the complete information regarding the latest jobs all around the India.