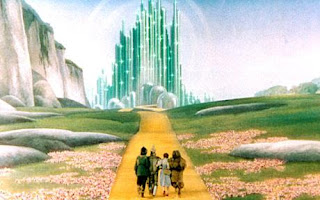 Can there be a happy ending in Syria somewhere over the rainbow?

On Anderson Cooper 360 last night, Anne-Marie Slaughter suggested there were only three routes for the international community to take regarding the Syria crisis.

With the flood of horrific images being uploaded onto Youtube each day, it's getting more and more difficult for outside countries to stand around and continue doing nothing. The number of victims in Syria has reportedly reached over 6,000 and the government has no intention of ending the violent crackdown on protesters any time soon.[1]

The US is very unlikely to do anything bold on its own. The current administration is focused on trying to get re-elected this fall and probably feels that US military intervention in the region (after Iraq and Libya) would not be looked favorably upon by the American public. If America decides to act at all, it will be through a multilateral effort, but this is impossible since Russia and China vetoed the latest UN Security Council resolution for the international community to respond.[2] The American embassy in Damascus also closed yesterday due to the situation, which makes US diplomatic intervention even more unlikely.[3]

But perhaps things in Syria could change for the better....A Russian envoy recently arrived in the country to meet with Al-Assad.[4] Foreign Minister Sergei Lavrov made several remarks that Russia was very concerned with the situation and disturbed by the amount of bodies that cannot even be identified. If any country has the diplomatic clout and influence to force a change in Syria, it is Russia. Besides, Russia could really benefit from being a force of positive change in the Middle East, a region in which it has fading influence.

Hopefully Turkey, the scarecrow of the bunch, will realize how dangerous a politically unstable Syria is to its national security.