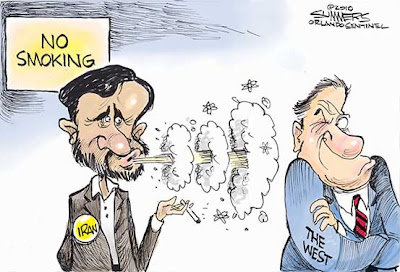 Under the belief that Iranian leadership is willing to pursue to a foreign policy that includes wiping its enemies off the face of the earth, a number of states in the West and Middle East have become restless at the thought of a nuclear Iran. From this perspective, the possession of nuclear arms would instantly transform Iran from a pariah state, into a regional hegemon that could use threats of nuclear warfare to bully its neighbors into reluctant compliance. Seemingly unfazed by international pressures, Iran appears determined to continue to develop its nuclear capabilities, whether for domestic or military use, no matter the cost. If possessing nuclear weaponry provides a gateway for additional power and international recognition, it would be irrational for Iran to cease its behavior even in the face of economic sanctions and widespread condemnation. But, is the benefit of nuclear capability really worth the ever-increasing price tag?

Although nuclear arms have the potential to create extensive physical and psychological damage, the procurement and maintenance of weapons is both time-consuming and resource-intensive. Generating an extensive stockpile of nuclear warheads may increase a state’s military capabilities on paper, but at the expense of monitoring and storing technology that becomes increasingly obsolete each passing day. An alternative to a mass buildup of arms is to instead focus upon the creation of small, tactical weapons that can be used for small-scale operations, but maintain the frightful guise of “weapons of mass destruction”. Nevertheless, in the case of Iran, it is not the size or strength of its arsenal that worry the international community, but the mere possession of the technology and capabilities to create nuclear arms.

Yet, without a nuclear attack since the back-end of WWII, the need to actually develop and construct nuclear arms is quickly becoming less of a necessity. In the case of Iran, it has oft been considered an international menace and military threat despite the lack of evidence that it possesses or has even pursued the proliferation of nuclear weapons. Instead, Iran has gained credibility through its ability to create doubts and confusion about its desires and pursuits, an achievement coined “strategic ambiguity”. By keeping its true intentions hidden, the Iranian state could potentially develop nuclear technology and gain recognition as a member of the “nuclear club”, without the costly measure of truly creating a single warhead. Although the risk of a nuclear facade may be worth the reward in the short-term, it is difficult to say how long the international community is willing to fear an Iranian state without proof that its bite matches its bark.
Posted by MM1948MM at 1:50 PM