Missile defense shield is back on the table 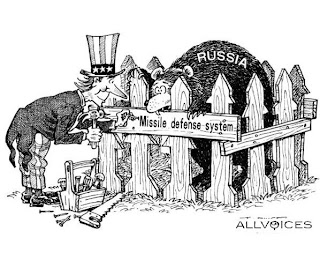 Well, the U.S. missile defense shield is back on the table after the Obama administration scrapped it in 2009 following Russian opposition. Since then, the administration has reworked its scheme. In addressing Russian concerns, the U.S. appears to have “bought” time and “masked” its intentions by distracting Russia with the signing of the nuclear arms treaty in April 2010 to reduce their strategic nuclear arsenals by about one-third. Romania and the U.S. have been in negotiations for the past year and as of yesterday, reports indicate that the U.S. and Romania have decided that U.S. ballistic missile interceptors will be deployed at a former Soviet-built airbase in southern Romania and operational by 2015.

And of course, Russia is again expressing its concerns that the shield could be used against them and is asking the U.S. legal guarantees on their intention not to deploy a missile defense system aimed at the strategic nuclear forces in Russia. The U.S. insists that the new smaller system is part of its new missile defense plan intended to protect U.S. forward-deployed troops and NATO allies against emerging Iranian short- and medium-range ballistic missiles.

Phase I was initiated in March with the deployment of the U.S. European-based, guided missile cruiser equipped with Aegis radar (the USS Monterey), allowing for an Adaptive Approach for Missile Defense (EPAA) system’s presence in the Mediterranean. Phase II is to include the deployment of 24 SM3-type interceptors in Romania, followed in 2018 by a similar deployment in Poland.

As can be expected, Russia made the statement saying it reserves the right to withdraw from the treaty if Washington presses ahead with missile defense systems in Eastern Europe in a way that Moscow opposes.

It will be interesting to watch how this development unfolds, given the outcome of the U.S.’s last attempt to build a defense shield in Poland and the Czech Republic, where Russia threatened to train their nuclear warheads on Poland and Czech Republic.

So, can the exact same playbook be expected this time around? You would hope that the U.S. came prepared with a new strategy in-hand before it decided to go “all in”. Or, have these defense shield negotiations merely been an attempt to deter Iranian ill-willed intentions, while simultaneously assessing Russian engagements with Iran without an actual intent to follow through on building a defense shield?
Posted by SemperGumbi at 11:55 AM