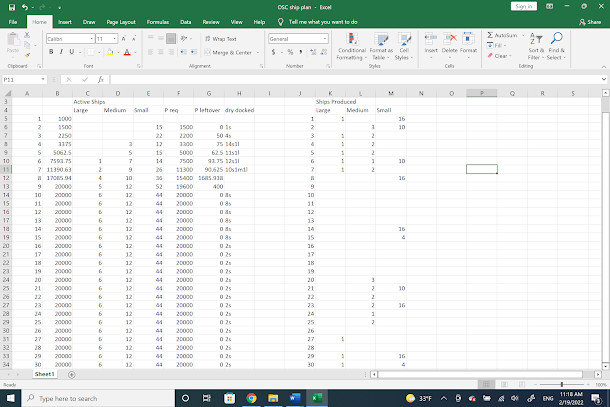 The screenshot above is my 30 year plan for this navy. My goal, especially in the beginning, was to create a plan that would maximize the usage of personnel and budget. But to best achieve this maximization, I first had to figure out what I wanted the end state of this navy to be when it reached its maximum personnel. I decided that 6 large ships, 12 medium ships, and 44 small ships would be a good composition. This would allow for six strike groups composed of 1 large ship, 2 medium ships, and 7/8 small ships. Once I figured this out, the first 10 years were important to building up to this composition as quickly as possible as the navy would reach its 20,000 maximum in year 9.

I was largely pleased with my plan as I was able to get to my desired composition in year 10, just one year after reaching the maximum personnel limit. The ships were constructed in a time frame that would have spread out replacement in later years so it didn't stress ship building capabilities or the budget. In those crucial beginning years I was mostly able to use the maximum amount of personnel available to the navy and maximize the $4 million dollar budget. However, I did face issues in years 8 and 9 where I wasn't able to fully maximize personnel usage due to ship building and budgetary constraints. I felt this was an acceptable trade-off though as it set up full usage going forward and reaching the desired composition in year 10. In years 8 through 19 ship building largely drops off because the navy was built. One could argue that I could've continued building new ships and cycling out older ships during these years that theoretically could be outdated, but I would contend that military ship technology is not changing at a pace that requires that level of replacement. The money in these years could have gone towards other things a navy needs like building out or improving infrastructure at bases, research and development, or maintenance costs.