Crimea isn’t the only home to Russian descendants who want to rejoin the Motherland. After its creation on March 21, 2014, a petition set up through the WhiteHouse.gov website entitled “Alaska Back to Russia” had already obtained over 30,000 signatures. 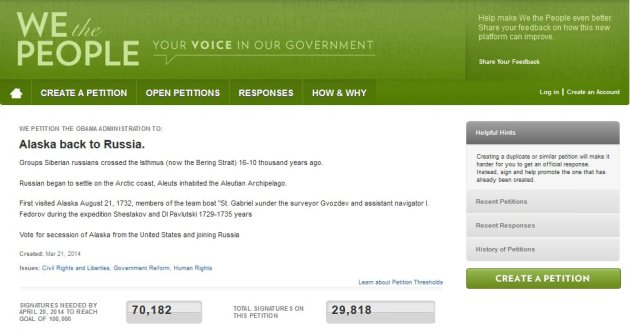 Despite the fact that it is impossible to determine just how many of the signatures are authentic, the chatter on Twitter has confirmed that at least some of those who support the petition are quite serious about their wish to be governed by the Kremlin.

The creator of the petition is an unidentified Anchorage resident who is known only by the moniker “S.V.” The petition itself is awkwardly worded, and often difficult to understand, but the intention is clear enough. If the petition achieves 100,000 signatures in 30 days, the White House will have to issue an official response, though it is doubtful that the administration’s answer will be any different than the one issued in reaction to a similar petition begun by residents in Texas: “our states remain united.” 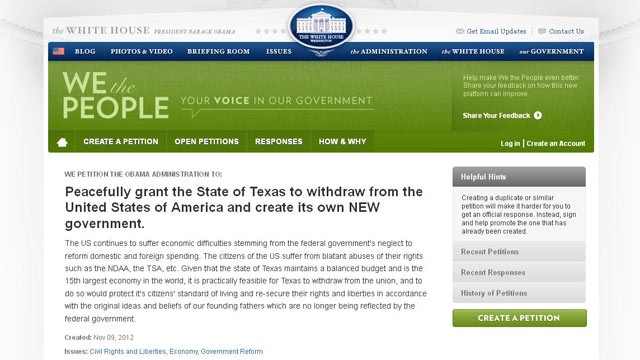 Even if the petition achieves the necessary votes for a response from the White House, the supporters’ hope of achieving secession is slim to none. In the wake of the Civil War and, in particular, as a result of the case Texas v. White in 1869, Supreme Court Justice Salmon P. Chase wrote, “The union between Texas and the other states was as complete, as perpetual, and as indissoluble as the union between the original states. There was no place for reconsideration or revocation, except through revolution or through consent of the States.”

More recently, Supreme Court Justice Antonin Scalia argued in a 2006 letter that, “if there was any constitutional issue resolved by the Civil Was, it is that there is no right to secede…the United States cannot be sued without its consent, and it has not consented to this sort of a suit.” Essentially, to go forward with a legal case in trying to obtain secession would require the state to sue the United States, but this is impossible, simply because the United States cannot be sued unless it wants to be.

All of this brings us around to the topic of whether a state will be allowed, at any point, to sue for secession. In particular, will Alaska be granted this right?

The answer is, quite obviously, no.

The benefits that Alaska has brought to the United States are too great to be forfeited. Alaska was purchased by Secretary of State William Seward in 1867, who paid Russia $7.2 million for the territory. This transaction later became known as “Seward’s folly” or “Seward’s icebox”, for most of Alaska was uninhabitable and considered a useless addition to the United States, despite the two-cents per acre selling price.

The settling of the land was slow to start, but after the discovery of gold in 1898, people moved in droves, and the state’s natural resources has made it a valuable asset ever since.

Regardless of the government’s response to the petition, if it issues one, one fact is clear: this is going to continue happening. Residents of all 50 states have appealed for secession, and in the case of Texas, over 125,000 people signed the petition. Despite the fact that the United States government holds the reigns on the decision of whether to grant attention to the petitions, it would do them well to look at the trends to find out what it can do to bring unity back to the nation.

Posted by Anonymous at 1:57 PM