The “Red Line” on Shifting Sand

Outside of North Korea recently, few global topics have come close to receiving the amount of discussion that Syria has received amongst students of defense statecraft, especially concerning possible military action by the United States.  The controversy now centers on whether President Obama’s “Red Line” of Assad’s use of chemical weapons has been crossed.  Recent news has indicated that “U.S. intelligence agencies had concluded with varying degrees of confidence that sarin, a nerve agent, had been released in Syria.”   As reported by the L.A. Times, the specific wording of that statement and the even more vague language that followed today in a Presidential news conference, may be indicating that the Red Line is growing softer.  While the evidence is becoming clearer that a nerve agent was used, the President indicated that we do not know how it was used, that it could even have been used inadvertently.  Furthermore, he would seek harder evidence for the purpose of winning international condemnation of the action.  He pointed out that what was occurring in Syria is “a blemish on the international community generally,” not just to the United States.
More importantly, the President was clear that he never promised military action even if the “Red Line” were crossed.   In the news conference, he stated that the crossing of the Red Line would be a “game changer,” but shortly thereafter felt the need to make even that term more vague.  “By 'game changer,' I mean that we would have to rethink the range of options that are available to us," he clarified.   Perhaps the Assad regime will feel the pressure of our “rethinking.”
Honestly, the extreme caution seems sensible in such a serious situation and with so much at stake. I think even recent history shows the importance of that tact.   Regardless, the question is a legitimate one of whether hollow threats and the use of language that is more vague than it is clear serves any productive purpose whatsoever in Presidential discourse.  Some fear it could even be sending the wrong idea to other American  foes like North Korea or Iran. 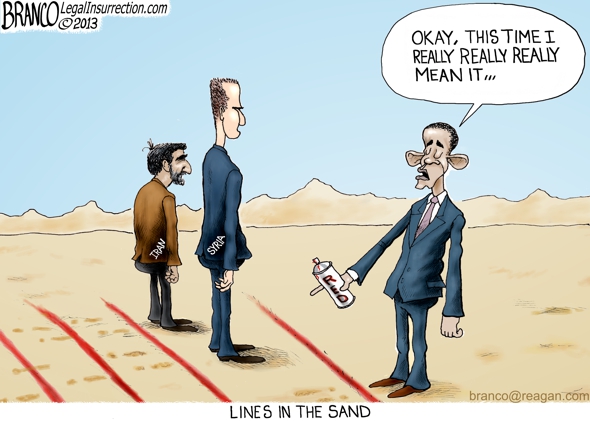 Posted by for the common defence at 12:24 AM

Hi, I came across your site and wasn’t able to get an email address to contact you about a broken link on your site. Please email me back and I would be happy to point them out to you.

As one of the best web design Trivandrum firm, we focus on customer satisfaction and customer support responsive web design tips.