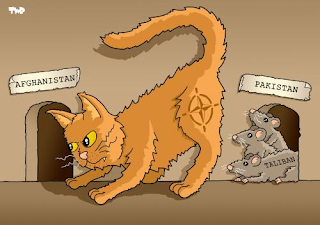 When talking about options for Afghanistan, you can't forget Pakistan. As everyone knows, the level of security in Afghanistan is dependent on the level of security in Pakistan, a political conundrum that has been plaguing policy officials for years. The U.S. has gone to great lengths to acquire Pakistani cooperation in denying safe havens to those who are fighting coalition forces in Afghanistan, but to this day the AfPak border is still more a jurisdictional concept than an effective barrier to insurgents. Senior policy officials, from the White House to the Joint Chiefs of Staff, are all united in involving Pakistan in a way that will hasten the withdrawal of coalition forces. Clearly, there is no victory in Afghanistan without securing Pakistan as well.

Oh wait, maybe not. Lieutenant General David Rodriguez, the second-most senior commander in Afghanistan, recently claimed that U.S. and NATO "could succeed in the war even if Pakistan refused to shut down [its] lawless frontier sanctuary that militants use for staging attacks on forces across the border." Rodriguez is the one in charge of the "day-to-day fighting in Afghanistan" so I'm compelled to hear him out. He points out that because Taliban forces sustained such heavy losses this past year, they will more likely shift their focus of attack from military forces to public officials. Such a diminished force would probably be unable to pose a significant military challenge. In short, if Pakistan doesn't want to help, that's fine.

General Rodriguez's comments also highlight the unintended benefit of Pakistan's inability to secure the tribal regions: drones are better at finding insurgents when they are concentrated in one place. North Waziristan may be a lawless safe haven for insurgents, but "safe" may not be a good word for it, since U.S. drone strikes are becoming more frequent there. Few people would characterize the daily chance of fiery death from above as "safe."

Furthermore, clashes between Afghan and Pakistani security forces have increased due to accusations that both sides are corrupt and are allowing insurgents to cross the border unhindered. Just two days ago, a firefight (including MORTARS) broke out along the border that resulted in the death of a Pakistani soldier. Both sides blame the other for shooting first.

I have a kooky idea: if you're guarding the border, guard the freaking border. Don't guard the other guards. See this video for more on guards.

What do YOU think, dear reader? Is victory in Af dependent on Pak?
Posted by Inigo Montoya at 9:26 AM