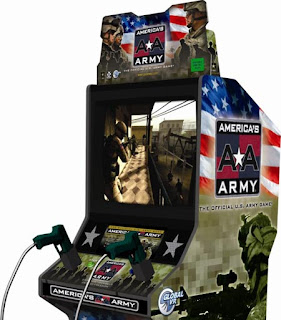 The recent cuts to various military programs got me playing Monday morning quarterback. After all, what fun is living in a democracy if you don't explain how you would do everything better? So with the loss of the F-22 for the time being and other cutbacks, I started to think about other ways that the military could trim some fat. And then I remembered one of the more interesting uses of American taxpayer's money: America's Army.

Originally just a computer game, America's Army was created as a "global initiative to help with recruitment". It has always been a free download for any aspiring virtual soldier but has expanded in recent years to become available on other video game platforms.

The problem is two-fold: First, it cannot be an effective recruitment tool. Just as 99.99999999999% of the target audience is able to distinguish reality from games enough to know that shooting someone in real life is a bad idea, that same percentage of people are aware that a game about the army is different than actually joining up (for one thing, the respawn time in real life is much longer). In addition, the public perception of such a program is problematic. Not only is there the argument that taxpayer dollars should not be spent on game development, but there is also a backlash against the blurring of the line between violence in entertainment and actual violence.

The development of virtual training tools is a great idea, it is cost effective and inherently less risky than live training. So on that particular front, I cannot help but endorse spending money. In terms of using similar programs as recruitment tools, I think money could be put to better use in other areas though and the costs of maintaining the program has hurt the military's PR more than it has helped.
Posted by Fork at 9:21 PM

Wow, where to start. First of all, it's not a recruiting tool, it shows realistic aspects of military service in the Army. Yes, of course people are aware htat this is just a game, but throwing out meaningless statistics isn't helping your argument.

As for the "backlash" against violence in entertainment, maybe you could offer some statistics there. A good majority of the gamers are over 25, mature adults, and there are studies that suggest those with "violent" natures had those tendencies as a pre-existing condition to gaming.

The cost of developing and maintaining this software has been minimal compared to many, many other defense projects. The postive aspects of this game, as a strategic communications tool, have been overwhelming. You want to lecture the DoD on waste, look elsewhere.

Actually, the newest version of Americas Army, version 3, is a joke and a total wast of taxpayer money. These clowns that sit pretty while drawing what must be some fat bank for "developing" this cheesy piece of shit game need to be all fired. They woul dnever make in a real game dev environment. This game needs to go in the toilet. Period. Done.

@j The entire point of this game was to server as a recruiting tool. Get your facts straight before you open your mouth. Also, most gamers are over 25? You must live in an area where adults have no life...

...and you should probably think about getting one since your feeble attempt to support this utter waste of taxpayer money is a farse...jackass